Poland's abortion stand-off heats up ahead of parliamentary vote

Parliament reviews restrictive Bill as pro-choice side lodges liberal one 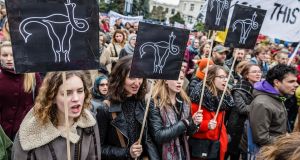 The gloves have come off in Poland’s bitter abortion battle, with pro-choice and anti-abortion camps lodging rival proposals to reform the country’s restrictive termination regime – in very different directions.

After months of emotive street protests, including gatherings of pro-choice campaigners wielding clothes hangers, the two competing Bills will now force a parliamentary debate over what Polish commentators have dubbed a “cultural war” in an increasingly polarised country.

The draft Bills will change existing Polish abortion legislation from 1993, which allows termination in only three cases: after rape or incest, if the child is “seriously malformed” or if the mother’s health is in danger.

Yesterday in Warsaw’s Sejm parliament, Polish pro-choice campaigners lodged a draft Bill that would liberalise this regime: allowing termination on request until the 12th week of pregnancy and improving access to contraception and sex education.

The proposal, from the Save the Women civic committee, attracted more than 200,000 signatures – twice the number required by parliament before it must consider a Bill.

But parliament is also dealing with a proposal, backed by the Catholic Church and the national conservative government, calling for an almost total ban on abortion. This proposal attracted over 400,000 signatures, and was delivered to parliament in 35 boxes.

“We want to change the law and those barbarous procedures that do not belong in the 21st century,” said Jerzy Kwasniewski, who assisted in drafting the anti-abortion draft. His campaign is calling for greater counselling facilities and more spending on care and rehabilitation for disabled children that women would be obliged to carry to term.

Parliament now has three months to consider both proposals to initiate a debate on the bill.

Anti-abortion groups have already stepped up their campaign, spreading videos claiming to show a living foetus after an abortion. The commentary from a Catholic columnist: “The innocent little one wept for an hour before it finally died.”

Given the anti-abortion campaign is supported by government MPs, the Catholic church and loyal media outlets, pro-choice campaigners say they are not optimistic about defeating  the “drastic” proposal. “At least we hope for a decent debate in parliament to show that society is not one-sided,” said Wanda Nowicka of Save the Women.

Parliament is now obliged to consider both bills in the autumn, with the result being a crucial bellwether of public opinion on other social issues.

Where Poles were once 60 per cent pro-choice and 40 per cent anti-abortion in the post-communist years, Polish researchers say levels of support have now reversed.

Prime minister Beata Szydlo, Poland’s first woman leader, has promised a free vote in parliament. Though her ruling Law and Justice (PiS) party has not drafted the anti-abortion bill itself, she and other leading figures have given their support to the endeavour. “As for my opinion, yes, I support this initiative,” said Ms Szydlo.

Jaroslaw Kaczynski, head of PiS and considered Poland’s most powerful politician by many, said he was “subject to the teachings of bishops” on abortion.

Officially up to 1,800 legal abortions are performed in Poland each year, though women’s rights organisations estimate that the true figure – when backstreet abortions and terminations abroad are included – may be as high as 150,000.

“I’m against abortion,” said Kasia, a 42-year-old Warsaw woman at a recent anti-abortion demonstration, “but women who need it should have access to a safe procedure, without having to spend a fortune in some basement.”

The new anti-abortion draft allows some loopholes for termination, saying a procedure “might” be allowed to save a women’s life. For pro-choice campaigners, this is too weak.

“It is a ‘might’ not a ‘must, and every doctor will be afraid of having the public prosecutor monitoring these cases,” said Nowicka. Even under the current regime, even if a woman meets one of the three legal criteria for a legal abortion, they say Polish doctors refuse to co-operate for moral reasons or fear of legal consequences.

Meanwhile Catholic bishops have demanded the new draft bill’s few remaining loopholes are removed to bring it in line with the fifth commandment: thou shalt not kill. “The position of Catholics in this regard,” bishops wrote in an apostolic letter in April, “is clear and unchanging.’’

That intervention prompted walk-outs of women from Masses around the country – footage of which went viral on the internet.