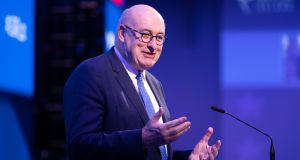 EU Commissioner for Trade Phil Hogan: weighing up whether to run to be the next head of the World Trade Organisation.

The position of Ireland’s EU Commissioner Phil Hogan is increasingly awkward in Brussels as he weighs whether to run to be the next head of the World Trade Organisation.

Hogan is expected to announce his decision on whether to run next week, after floating the idea of being a candidate following the sudden resignation of Brazilian diplomat Roberto Azevêdo from the post.

In the meantime, European Commission president Ursula von der Leyen has restricted his public appearances and activities to stop speculation about his run from becoming a distraction.

To guard against any potential conflicts of interest, Hogan’s boss, EC vice president Valdis Dombrovskis, has been brought in to supervise decisions on policy proposals or trade negotiating positions that the former Fine Gael minister is responsible for, under a so-called “four-eyes-principle”.

“I’m sure Mr Hogan is of the same view, the situation is better clarified as soon as possible,” a commission official told The Irish Times. “But that’s not entirely in his hands, and in the meantime we’re making the best of it that we can.”

The restrictions meant that Hogan did not give a press conference to launch the first overarching review of EU trade policy since 2015, and instead delivered prepared remarks in an online event organised by the Florence-based European University Institute.

An inability to sign letters on his own or attend press conferences is seen as a “fairly serious” hampering of his ability to function as a commissioner, according to one diplomat.

Hogan is highly regarded in Brussels and considered a powerhouse with the commission. But this esteem may work against his bid, because some of the states that are his biggest supporters, such as the Netherlands, want him to remain in the commission as a bulwark for liberal free trade policy against a push for more protectionist policies from countries such as France.

Concerns that the supply chain failures and shortages exposed by the pandemic would be exploited to fuel a backlash against free trade led the Irish government to circulate a paper to EU counterparts in April that warned against protectionist impulses, and Hogan has spoken out on the issue.

The former Kilkenny TD would still be a strong contender to be a unanimous EU candidate. But it is unclear whether the member states will opt to jointly back one name, either through lack of agreement, or because national governments choose to guard their right to make independent decisions on the issue.

The Dutch trade minister Sigrid Kaag has openly said the Netherlands won’t rule out backing a candidate from outside the EU altogether.

Other member states believe it is high time for the WTO to have its first female or African leader. The Nigerian economist Ngozi Okonjo-Iweala, who ticks both boxes, is one name in circulation.

If Hogan declares he will run, he is expected to immediately take a leave of absence from his role in the commission in order to campaign.

He has a reputation as a canny political operator, famously kindling a close relationship with the EU’s chief Brexit negotiator Michel Barnier by bonding with him at the funeral of French farmers’ leader Xavier Beulin in 2017.

But the circumstances of the pandemic restrict Hogan’s ability to mingle. Previous candidates for the job jetted around the world from capital to capital to schmooze and build support for their bids. Hogan would be restricted to the less personal tools of Zoom and YouTube.