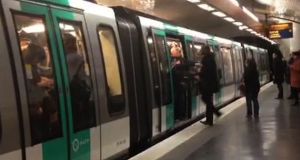 A still from the video of Chelsea football fans repeatedly pushing the man off a Paris Metro train on Tuesday night. Photograph: Guardian/AFP/Getty Images

A Franco-Mauritanian office worker, identified as 33-year-old Souleymane S, has filed a formal complaint with French police after learning that the Guardian published a video of Chelsea football fans repeatedly pushing him off a Paris Metro train on Tuesday night.

The anti-hooliganism service of the Paris police opened an inquiry into “wilful violence for racial reasons on public transport” after the video was shown on French and British media. Scotland Yard is assisting French authorities in their search for the perpetrators, who could be sentenced to three years in prison and a fine of €45,000.

Last night Chelsea suspended three people from their Stamford Bridge stadium. “If it is deemed there is sufficient evidence of their involvement in the incident the club will issue banning orders for life,” it said. “We have received substantial information to date following our witness appeal and we are grateful to the many Chelsea supporters who have provided information so far.”

The video was taken on an smartphone by Paul Nolan, a Briton living in Paris. Nolan was on the platform at the Richelieu-Drouot station, near the bars in the first and second arrondissements frequented by Chelsea supporters. It was about 7.30pm, before the first leg of Chelsea’s Champions League tie against Paris Saint-Germain at the Parc des Princes stadium.

A black man attempted to enter the

Metro carriage, but was shoved out by the British fans. “I tried to force my way in,” Souleymane S told Le Parisien newspaper. “I lost my telephone in the scuffle. They were saying things to me in English, but I didn’t understand . . . I knew they were Chelsea supporters, and I realised it was connected to the PSG match.

“I also understood that they were pushing me because of the colour of my skin. I live with racism, so I wasn’t surprised, except that this was the first time in the Metro.”

No one tried to help or defend Souleymane. The train departed and he took the next one. “I went home and didn’t tell anyone, not my wife, not my children. What would I say to them? That daddy was pushed in the metro because he’s black?”

It is not clear if two of the Chelsea fans shown on the video were involved in the incident. Season-ticket holder Josh Parsons (21) was identified from a photograph that he posted of himself four months ago standing beside Nigel Farage, the leader of the anti-immigrant party Ukip. A former schoolmate of Parsons, who was interviewed by the Guardian, said Josh and his brother Beno were “a) Chelsea fans and b) Ukip supporters”.

The tweet alluded to Chelsea captain John Terry, who was banned for four matches and fined €298,000 in 2012 for racist insults against Anton Ferdinand, a black player with Queens Park Rangers.

The incident has been strongly condemned by Ukip, Chelsea and Uefa, European football’s governing body.