New battlelines for Turkey’s Kurds as they become political force

While the HDP’s success marks a historic shift, it also creates a new set of obstacles 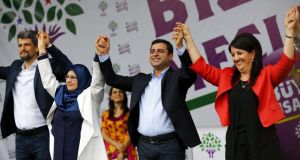 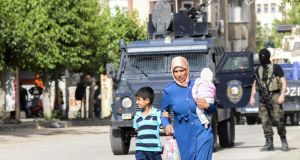 Idris Ozkan wears a broad smile as he talks about Turkey’s recent parliamentary election. As a Kurd who sells tea from the back of a van in Istanbul’s Okmeydani district, he sees the future of the country’s politics very positively indeed.

“We need a Kurdish party in parliament because of all the bad things that have happened Kurds in the past,” he says, dragging on a cigarette. “There was so much murder and torture; because of that, we have to be in parliament.”

After decades of repression and a war on their people, culture and places, Turkey’s 15 million Kurds have finally emerged as a potent political force. Parliamentary elections this month saw the Kurdish-rooted Peoples’ Democratic Party (HDP) climb above the parliamentary threshold of 10 per cent, meaning a Kurdish-rooted party now has a seat at the top table of Turkish politics.

Turks and citizens in neighbouring Iraq and Syria are well used to violent Kurdish activity – more than 40,000 people have died during the war between the Turkish state and the Kurdistan Workers’ Party (PKK) that has been suspended since 2013. Likewise, Kurdish civilians were for decades subjected to violent state repression that included authoritarian village guard systems and localised states of emergency.

However, Kurds in Turkey are far from a singular force. The majority identify as conservative Islamists and have regularly sided with the AK Party against the secular, leftist PKK. As a result, many are suspicious of what the left-leaning HDP stands for, particularly as it is viewed by many as the political wing of the PKK.

This deep division was unleashed most brutally last October following the government’s decision to stop Turkish Kurds from entering Kobane in Syria to fight off Islamic State jihadists besieging the town. More than 40 Kurds were killed in communal violence between Islamist and PKK-supporting Kurds across southeast Turkey in just a couple of weeks.

More recently, Aytac Baran, a leading member of a Kurdish Islamist charity, was shot dead outside his home in Diyarbakir on June 9th. Two more Kurds were killed in retaliation shootings in the city. Local news outlets say weapons sales in Diyarbakir have increased 1,500 per cent since the June 7th election while an Islamic State-aligned man arrested for the bombing of a HDP rally that killed four and injured more than 200 people on June 5th is Kurdish.

“Although some leftists, feminists, environmentalists and progressive Turks voted for the HDP, it was really the votes of conservative Kurds who normally vote for the AKP that determined the HDP’s electoral victory,” said Cale Salih, an analyst at the European Council on Foreign Relations think tank. “The HDP cannot rely on leftist/progressive Turkish votes to carry it through future elections.”

Holding on to that vote – and to its parliamentary life – centres on pushing through a peace deal with the PKK while avoiding a return to violence. Tellingly, for the first time, HDP co-chair Selahattin Demirtas has called up personal security for protection.

Demirtas, whose handlers refused numerous requests from The Irish Times for an interview, controversially pledged support for Lebanese group Hizbullah on its TV channel this week. The fact that Demirtas’s brother is believed to be a member of the PKK fighting against Islamic State in northern Iraq further complicates the party’s regional stance.

“I don’t believe in this [peace] process because we know the AK Party is trying to appear to be polite until they destroy the PKK,” said Hacer Ozcan, an Alevi Kurd, who says the HDP’s entry to parliament will damage the Kurdish cause. “I won’t eat dinner with my enemies, therefore I don’t believe in this process.”

“Rhetoric like this increases the perception among Kurds that the AKP is supporting Islamists against Kurds, both in Turkey and in Syria,” she said. “[That] damages Kurdish trust and confidence in the AKP’s ability to deliver on a credible peace process.”