Madrid and London on different pages over independence vote

In remarks about Scotland, Spanish PM Rajoy was sending a message to Catalonia 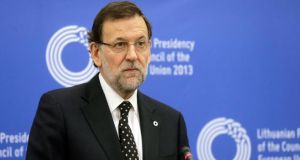 Spanish prime minister Mariano Rajoy: took the unusual step of speaking out about Scotland’s relationship with the EU should it break from the UK. Photograph: EPA/Valda Kalnina

When the Spanish and British prime ministers met in Vilnius yesterday during the EU summit they had plenty to talk about, with bids for independence by Scotland and Catalonia dominating much of the news agenda in their respective countries lately.

Next year will be key for both independence campaigns. A Scottish referendum on the issue is scheduled for September and Catalonia’s nationalist government is planning a similar vote, despite Madrid’s insistence it would be unconstitutional, with a date due to be announced by Christmas.

Comparisons
In recent days comparisons between the two processes have become inevitable, after Spanish prime minister Mariano Rajoy took the unusual step of speaking out about Scotland’s relationship with the EU should it break from the UK.

“I respect all the decisions taken by the British, but I know for sure that a region that separates from a member state of the European Union would remain outside the European Union and that should be known by the Scottish and the rest of Europe’s citizens,” he said on Wednesday.

According to Scottish conservative leader Ruth Davidson, Rajoy’s comments had “blown Alex Salmond’s case for EU entry out of the water”, coming as they did the day after the Scottish first minister had presented a White Paper detailing his vision of independence. But the Spanish leader’s remarks were seen primarily as a message to the restive region in the northeast of his own country.

In both Scotland and Catalonia, the EU membership issue has become key, with several bloc officials backing Rajoy’s version of events should a region break away from a member state. For it to return to the fold as a nation it would, theoretically, need the agreement of all 28 countries – meaning Spain or the UK could veto Catalan or Scottish membership.

Salmond accused his rivals this week of “scaremongering” by talking up such a scenario, adding that Scotland could negotiate its EU membership ahead of independence. In a similar vein, Catalan separatists argue the Spanish government is using the EU hurdle to spook voters.

Alfred Bosch, of the pro-independence Catalan Republican Left, said it was in the EU’s interests to keep Catalonia in the fold. “Common sense will prevail,” he said. “Nobody wants 7.5 million consumers and taxpayers out of the union.”

Charm offensive
But despite parallels on the EU membership question, the responses of Madrid and London to the independence bids have contrasted sharply. Following its agreement to hold a referendum, the British government has launched a multi-party charm offensive, “Better Together”, to persuade voters north of the border to vote “No”. The Spanish administration has been more combative, focusing more on what it says is the illegality of a unilateral referendum than on trying to win over Catalans.

“The kingdom of Spain is way behind the United Kingdom in acceptance of democracy and the pluri-national nature of the state,” said Bosch.

But while Catalan separatists present the Cameron government as a beacon of democracy compared to the intransigence of Madrid, José Ignacio Torreblanca, of the European Council on Foreign Relations, says Rajoy’s stance makes sense. “Spain hasn’t accepted a referendum,” he said. “Therefore the government isn’t trying to win a vote, it’s trying to prevent one.”