It is not about being about being Blairite or anti-Blairite, but deciding ‘if we want to win?’ 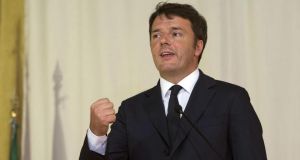 “The Labour party remains the only party that likes losing after the demise of the Washington generals,” Mr Renzi said.

The US basketball team shut down this year after losing more than 16,000 games to its sparring partner, the Harlem Globetrotters.

Mr Renzi is head of Italy’s largest centre-left group, the Democratic Party (PD), which is in the same political family as Britain’s Labour in the European Parliament.

The prime minister said that Labour had condemned itself to languish in opposition by selecting Mr Corbyn as its new leader after the previous head, Ed Miliband, resigned when Labour lost a general election in May.

Mr Renzi told a meeting of senior PD officials shown on Italian television. “We are not talking about being a Blairite or an anti-Blairite, but deciding if we are happy just to take part or if we want to win,” he said.

However, a poll published in Britain at the weekend said 72 per cent of people did not believe Mr Corbyn looked like a prime minister-in-waiting, and former Labour leader Tony Blair has said the party is unelectable with Corbyn at the helm.

Taking a swipe at another prominent European left-winger,

“We’ve got rid of him too,” Mr Renzi said, warning dissident factions within his own PD party of the dangers of splitting from the mainstream leadership.

Mr Tsipras won re-election in the ballot and received a swift congratulatory phone call from Renzi on Sunday night.