As some block roads in north, EU foreign policy chief flies to Belgrade to calm situation 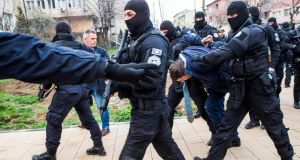 Serbia’s chief negotiator in EU-brokered talks on Kosovo, Marko Djuric, is frogmarched down a street in Pristina by Kosovan police officers on Monday. Photograph: AFP/Getty Images

Ethnic Serbs in Kosovo have built roadblocks and their politicians have left the country’s coalition government in protest at the expulsion of a senior Belgrade official.

The European Union’s foreign policy chief, Federica Mogherini, said she would make a previously unplanned visit to Belgrade on Tuesday evening to try to ease rising tension a decade after Kosovo declared independence from Serbia.

Marko Djuric, Serbia’s chief negotiator in EU-brokered talks on Kosovo, was arrested by police special forces on Monday and frogmarched through Kosovo’s capital, Pristina, after entering the country illegally.

Officials from Kosovo’s ethnic Albanian majority say police upheld the law after Mr Djuric was told not to cross the border, but footage of the heavy-handed operation to seize him outraged many Serbs.

“As representatives of the Serbian people in Kosovo, we will no longer keep quiet,” said Goran Rakic, the head of Serbian List.

He announced his party’s withdrawal from the government of Kosovo prime minister Ramush Haradinaj, and said that next month Kosovo Serbs would form a so-called community of Serb municipalities without Pristina’s permission.

Agreement was reached in 2013 to create this association, which is intended to protect the rights of minority Serbs and give them broad autonomy in Kosovo, but implementation has been delayed amid complex and often fractious talks.

With bandages around his wrists, Mr Djuric said “Albanian separatists in Pristina, with unequivocal support from some western, international circles, brutally attacked our people with a clear aim . . . to occupy the north of Kosovo.”

He claimed that Kosovo police had shoved him in the stomach with a rifle, pulled out a knife and shouted “Allahu akbar” while transporting him to Pristina.

Video footage showed black-clad officers, some wearing balaclavas, using stun grenades to clear Serbs from the entrance to a building where Mr Djuric was attending a meeting in the ethnically divided Kosovo town of Mitrovica.

They then turned over tables, forced people on to the floor and jabbed some with guns as they arrested Mr Djuric, who was later led with his arms behind his back into a police building in Pristina. He was returned to Serbia shortly afterwards.

Protesting Serbs subsequently blocked several roads in northern areas of Kosovo where they form a majority.

In Pristina, Mr Haradinaj insisted that he would not resign, despite losing his parliamentary majority with the departure of Serbian List.

“Yesterday’s action was not directed against Serbian citizens, or Serbian officials, but only against those who violated laws . . . It was not a demonstration of force, but only implementation of the law,” he said.

“It is time for dialogue and to sit at the negotiation table,” added Mr Haradinaj, who was a rebel commander in 1998-1999 fighting with Serbian forces.

The dispute comes at a tense time, barely a month after Kosovo marked 10 years of independence from Belgrade and two months after moderate Serb politician Oliver Ivanovic was shot dead in Mitrovica.