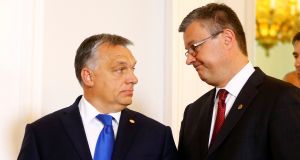 Hungarian prime minister Viktor Orban has urged the European Union to stabilise Libya, so as to reduce the number of migrants crossing the Mediterranean Sea and to allow “a giant refugee city” to be built on the country’s coast.

Mr Orban aired his latest radical idea for tackling Europe’s refugee crisis at a meeting of leaders from states on the so-called Balkan route, which more than one million migrants and refugees followed from Turkey to Germany last year.

There was broad agreement on the need to strengthen security on Europe’s southern borders and to seek agreements with Afghanistan, Pakistan and African states to allow the EU to send failed asylum seekers home more swiftly.

However, the Vienna talks failed to make any obvious progress on a German-led plan to distribute refugees among EU states according to a quota system, which Mr Orban and several of his central European counterparts vehemently oppose; Hungary will hold a referendum on the issue next Sunday.

Only days after declaring that the EU should deport all illegal immigrants to “an island or some shore of north Africa” where they could apply for asylum, Mr Orban stated that the bloc needed “a new Libya policy”, to shore up a country that has been in turmoil since the bloody fall of Muammar Gadafy in 2011.

“Libya is a region whose shores can be used to set sail for Europe because no state exists there . . . Unless we preserve Libya as one and stabilise it we cannot create the gigantic refugee city by Libya’s Mediterranean coast,” Mr Orban said.

Striking a less ambitious note, Austrian chancellor Christian Kern said the talks had focused on practical ways to tackle the crisis that had broad agreement from states along the Balkan route.

“We are focusing on where we can achieve something and implementing that more forcefully,” he said.

“The redistribution issue was discussed, but I am convinced that we will make progress on that when the first two things are solved, namely building up border protection [and] building appropriate support structures in countries of origin.”

The UN refugee agency reported this month that only 4,776 of 160,000 people covered by the schemes had been relocated from Greece and Italy.