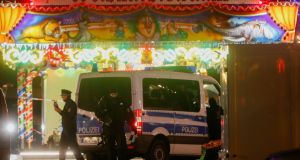 A policeman with a fire extinguisher over his shoulder walks next to a police car in front of a Christmas market stall in Potsdam, after it was evacuated by policeon Friday. Photograph: Felipe Turela/EPA

German police evacuated the city centre of Potsdam, near Berlin, on Friday afternoon after a package was found near a Christmas market containing fireworks and “hundreds of nails” in a tin.

The suspicious package was handed into a Potsdam pharmacy at about 2.30pm on Friday. An employee opened it, discovered wires, white powder and batteries inside and called the police.

They evacuated the area around the city centre Christmas market to examine the package. Police said the “unconventional explosive device” contained no detonator and was incapable of exploding.

The Potsdam evacuation of the market and local homes comes a year after a market attack in Berlin left 12 dead.

Security has been stepped up at all markets across Germany ahead of that anniversary, and the looming first Advent weekend.

On Monday, the Berlin market reopened on Breitscheidplatz, a large traffic island in the western city centre, behind a wall of two-metre long, 500kg concrete barriers.

“The Christmas markets are part of our lives and our culture,” he said.

Despite the show of calm, tensions are running high since last week when six men were arrested over an alleged plot to attack a market in the western city of Essen.

On December 19th, 2016, a failed Tunisian asylum seeker and Islamic State sympathiser, Anis Amri (24), stole an articulated lorry and ploughed into booths in the market.

The attack killed 11 at the scene; Amri also killed the driver of the stolen truck and was later shot dead in a gunfight with police in Italy.

With the Potsdam market closed until further notice, the western Berlin market will close on December 19th, the anniversary of the attack, for a memorial service.

The city will then unveil a memorial to the attacks: a bronze crack inserted into the pavement and, on the steps leading to the church, the names of the victims.