France faces ‘economic and social crisis’ due to Covid-19 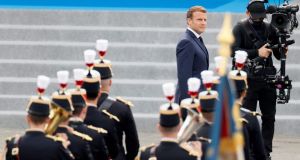 French president Emmanuel Macron wants to make the wearing of face masks obligatory in all indoor public places from August 1st, he said on Tuesday in a Bastille Day television interview.

The measure has been advocated by health professionals for months. At present, masks are required only in public transport.

Covid-19 infections are increasing in France and Macron said the country was prepared for a second wave of the epidemic. “We know now how many masks, ventilators, anaesthetics and medicine we need,” he said. “We have the stocks and secure supply chains.”

Macron said experts expect 900,000 more people to lose jobs by next spring. The French government will spend €30 billion to alleviate the employment crisis. Jobs for young people and those earning up to 1.6 times the minimum wage will be exempt from social charges.

France “has been shaken and traumatised. We must recognise the seriousness of it,” Macron said. “After the medical crisis, the economic and social crisis is ahead of us.”

French national day usually honours the armed forces. “But this July 14th, the armed forces let medical personnel, the men and women who protected us, who fought for us, be the stars,” Macron said.

Asked if he understood why demonstrators in pre-epidemic gilets jaunes and pension reform protests had shown such hatred towards him, Macron said he did.

“Because we are a country that has that in its history, in its guts. Because I doubtless gave an impression that I was something which I do not believe I am, but which people came to hate: a president who wants to reform everything, so that only the best can succeed as we adapt to globalisation. That is not my plan.” Macron blamed his own “clumsiness” and statements sometimes taken out of context.

He admitted making “errors that did not enable me to unite the French. We didn’t produce enough results, because we didn’t move quickly enough”.

Before the current crisis, France “was winning the battle against mass unemployment, and lowering taxes”, Macron said. He carried out reforms “that were thought to be impossible” during his first years in office.

Though France was “far from worst” in many areas, the French “permanently doubt ourselves and our country,” Macron said. He quoted Gen Charles de Gaulle regarding France’s “sad passions, that is to say the forces of division ... which often stop us going forward because we think only of those divisions.”

Asked why he replaced Edouard Philippe with Jean Castex as prime minister on July 3rd, Macron said it would have been impossible for him to initiate “a new path, a new method, a turning point in my term of office, and to say I was doing it with the same team”.

He chose Castex, he said, because he was known to have a “culture of social dialogue”.

The French leader bridled at suggestions that the two prime ministers, both conservative, high-ranking civil servants who attended the elite École Nationale d’Administration, resembled one another, and that his government is right wing. “I radically disagree,” he said. “I believe in rising above politics.”

Macron defended his appointment of Gérald Darmanin as minister of the interior while Darmanin is under investigation for an alleged rape. Macron said he would not allow Darmanin to become “the victim of street or social media justice, as happens in Anglo-Saxon countries”.

Turning to the Covid-19 epidemic, Macron asked all French citizens to wear face masks “to the maximum possible, all the more so when they are in a closed space”. Masks would be “totally obligatory” in indoor public spaces from August 1st, he said.

In the event of a second wave, Macron said he did not want another national lockdown, but would advocate a “nuanced approach” at local level. “The key is to be vigilant throughout the country.”

Employment would be the top priority after the summer holidays, Macron said. He has angered trade unions by vowing to go ahead with the pension reform that was shelved during the lockdown. There was no choice, because France’s pension deficit now stood at €30 billion, he said.

Nonetheless, “pension reform cannot be done the way it was started before the crisis. It must be discussed and negotiated,” he said. Castex, the new prime minister, is to begin meetings with social partners on Friday.

Macron promised that by 2022, all police units will be required to film identity checks. The measure will make it possible “to establish the truth” in the event of accusations of police brutality.

Macron advocates reducing the number of parliamentarians and introducing proportional representation. High levels of abstention indicate “a democratic crisis”, he said. “The idea has taken hold that leaders can change nothing.”