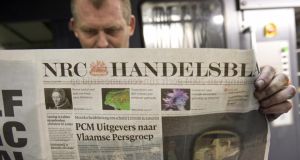 Media organisations in the Netherlands, normally in cutthroat competition with one another, have become the first in the world to co-operate to create a specialist web platform which will allow whistleblowers to leak confidential documents securely.

Prompted by the controversy over Edward Snowden, the former CIA and NSA contractor who leaked details of top-secret US and British government mass surveillance programmes, the Dutch media outlets say Publeaks.nl will be sophisticated enough to defy even professional state hackers.

‘Unique collaboration’
“This is a unique collaboration without a global precedent, at a time when both the media and the public are aware that the safety, protection and privacy of whistleblowers are more important to democracy than ever”, said the Publeaks Foundation, which expects other countries to follow suit.

Developed in co-operation with the Hermes Centre for Transparency and Digital Human Rights, which specialises in “whistleblowing technologies”, the site will allow whistleblowers to channel documents to a specific organisation, while remaining, if they wish, totally anonymous.

All the country’s main TV and radio stations, news agencies, and newspapers, including NRC Handelsblad and Het Financieele Dagblad, are taking part, and the whistleblowers will simply have to click on the outlet or outlets they wish to give access to their data.

Promise of balance
The media organisations, for their part, have made a commitment to verifying any material sent to them, finding other sources to support the content before they consider publishing, and ensuring that any stories which emerge are appropriately balanced, with hearings offered to all sides.

Journalists will be able to put questions to the whistleblowers on a secure section of the platform – though the informants will not be obliged to take part.

Where information is sent to several organisations, they will be free either to investigate jointly or to compete with another, if the informants have not made their preferences explicit.

The foundation underlined last night that neither it nor anyone involved in the operation of the Publeaks.nl platform itself would have access to documents or other data channelled through it.