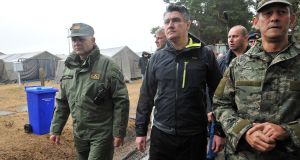 Croatia’s prime minister Zoran Milanovic has rejected the possibility of talks with Hungarian counterpart Viktor Orban over his threat to seal their countries’ border with a fence to block refugees and migrants, dismissing the plan as mere “bravado”.

During a visit to a rain-lashed transit camp for migrants in eastern Croatia on Tuesday, Mr Milanovic was scornful of a security fence that Mr Orban’s allies say will be closed should people continue to pour across the Croatia-Hungary border.

“It is impossible to seal the border until a complete wall has been created. At this time, it cannot come to pass. Maybe by next springtime, but not now,” said Mr Milanovic at the Opatovac camp.

“Nothing will change. Winter will come and this [refugee and migrant flow] will ease off,” he added, at a facility through which more than 80,000 people have passed in the fortnight since Hungary completed a fence along the Serbian border, diverting them westward.

“This is a threat,” said Mr Milanovic of Mr Orban’s “unacceptable” attempt to extend the fence along Hungary’s border with Croatia.

“Sometimes I wonder if we really share the same values,” he added of Mr Orban, the most strident of a group of mostly central European leaders who call the influx of migrants a threat to Europe’s security and traditional Christian identity.

“I will not talk to him, and I wonder who does. This is just bravado – but for whom? We don’t hear it from countries that are doing the most, like Germany. This is just low.”

Mr Milanovic’s denunciation of the Hungarian leader came just a day after he said he would no longer talk to Serbia’s prime minister, Aleksandar Vucic; they briefly barred each other’s cargo vehicles from their territory last week, as a row over the handling of the migrants spiralled into a short but damaging trade dispute.

Mr Orban has set Hungary’s army to work to extend the fence on its Serbian border along the frontier with Croatia, and senior officials said this week that it would be sealed if the flow of migrants along that route became too great.

Relations are now fractious in the region, with Mr Orban and his costly fence being made to look somewhat foolish by Croatia’s provision of dozens of buses each day to carry migrants to its border with Hungary, avoiding the Serbian-border fence; Hungarian trains and buses then take them on to the Austrian frontier.

At the moment, migrants are flowing relatively smoothly through the Balkans and on through Hungary and Austria to Germany – where most want to go – and other favoured destinations such as Sweden and the Netherlands.

Senior Austrian officials warned yesterday, however, that the country had a vital role to play in controlling the flow of migrants and helping Germany to cope.

“The impression must not arise in Germany that the Austrians are doing the same thing as the Hungarians, simply moving people on . . . We must show Germany through co-operation that we are fulfilling our duty,” said Austrian chancellor Werner Faymann.

Austria’s interior minister Johanna Mikl-Leitner warned that if the weight of migrant numbers entering Germany prompted it to further tighten control over their border, then “there will be a massive backlog here in Austria, and therefore here we quickly need a European answer”.

“Otherwise there will consequently be only two possibilities: either we carry on as until now, or there will be strict controls at the borders . . . But then we must presume that images of force will emerge, that the use of force will be necessary.”

Hungary was widely condemned by fellow EU states and international organisations when its riot police used tear gas and water cannon to beat back a small group of stone-throwing migrants at its border fence this month.

Mr Milanovic says Greece must stop migrants flowing unchecked into the EU, and he has lashed out in several directions over the crisis: at Serbia and Hungary for allegedly conspiring against Croatia, and at the right-wing HDZ opposition party that could oust his Social Democrats in a general election expected in November.

He has accused the HDZ of using the crisis to spread disquiet and destabilise his government. And he has adopted a harder line in a bid to blunt the threat from a nationalist party that is traditionally tough on security issues.

On Croatia’s annual “police day”, Mr Milanovic was shown around Opatovac by interior minister Ranko Ostojic and gave awards to several officers as buses continued to bring in asylum seekers from the Serbian border about 15km away.

The camp, which can accommodate about 5,000 people in ranks of large military tents, was a hive of activity ahead of Mr Milanovic’s arrival, as army trucks, bulldozers and steamrollers dumped tonnes of gravel and pounded it into solid and serviceable paths, where a quagmire had been rapidly developing.