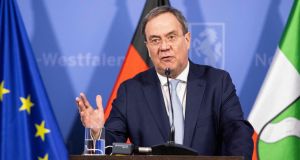 Now an eastern CDU parliamentarian has resigned amid claims he took lobby payments from the government of Azerbaijan to boost its profile in Germany.

Mark Hauptmann, an MP for the eastern state of Thuringia, has denied investigator claims he attempted to influence policy on behalf of the authoritarian oil-rich former Soviet Republic. He conceded the country – as well as Vietnam and Taiwan – paid for advertorials in a newspaper he publishes, but said his resignation was to protect his family from public attack.

Mr Hauptmann is not the first party figure to lose his parliamentary immunity as part of the ongoing investigation into the Azerbaijan cash-for-influence affair.

CDU politician Axel Fischer, representing the southwestern city of Karlsruhe, has denied claims he took payments to influence policy in Azerbaijan’s favour at the parliamentary assembly of the Council of Europe, the continent’s leading human rights body.

An indictment accuses Mr Fischer of receiving payments over a period of eight years until 2016 via a British company with bank accounts in the Baltic region. “This can all be cleared up,” said Mr Fischer to a regional newspaper, “but until then my reputation is of course ruined.”

Mr Fischer has not stood down as an MP.

A second CDU MP and a retired CSU politician are also part of the ongoing investigation into Azerbaijan payments.

A further controversy this week concerned a CDU MP from the western state of Hesse who celebrated his 60th birthday in style despite lockdown restrictions.

And the CDU-run economics ministry has stopped emergency liquidity payments to companies amid fears that flaws in its software saw criminals extract hundreds of millions of euro illegally.

The CDU’s growing list of political woes has alarmed the party leadership before voters go to the polls on Sunday in the southwestern states of Rhineland-Palatinate and Baden-Württemberg.

The party was not expecting to win either state but final polls suggested a drubbing is on the cards. The recent revelations have aggravated still further voters already frustrated with Germany’s slow vaccination rollout and complicated relaxation of pandemic restrictions.

After just two months in the job, CDU leader Armin Laschet on Friday dismissed as “absurd” comparisons between the current revelations and his party’s 1999 fundraising scandal. “These comparisons are really not acceptable,” he said.

Then ex-chancellor Helmut Kohl – a year after leaving office – admitted accepting undocumented payments from donors he refused to name. The revelations forced the resignation of his successor as leader, Wolfgang Schäuble, and prompted the rise of Angela Merkel.

Now six months before Dr Merkel ends her fourth and final term in office, Mr Laschet and his allies are struggling to contain a scandal that seasoned officials say is not yet under control.

On Wednesday evening CDU leaders in the Bundestag distributed a statement to all its parliamentary party members, to be returned signed by 6pm on Friday, confirming that they had not received any financial payment in 2020/21 related to Covid-19 pandemic measures.

“The CDU wants to win back credibility,” commented the Süddeutsche Zeitung daily, “and that’s why it’s annoying that MPs are only being asked about [payments involving the] Corona business.”