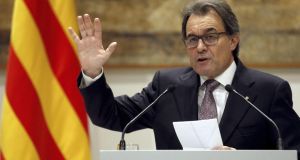 Catalonian regional government president, Artur Mas, addresses the media during a press conference held in Barcelona, where he announce that elections in Catalonia. Photograph: Alejandro Garcia/EPA

Catalan president Artur Mas has called for early regional elections in September, asking voters to cast their ballots on independence from Spain for the second time in a year.

The vote will be held on September 27th while the campaign will kick off on Catalan National Day, September 11th, which has seen million-strong pro-independence demonstrations in Barcelona the past three years.

Mr Mas reached an agreement with his separatist rival, Esquerra Republicana leader Oriol Junqueras, to run separate tickets, but with a common road map toward secession, making it a de facto referendum on secession.

“Our adversaries would have wanted us to remain divided,” Mr Mas said in a televised address last night. “We managed to re-establish our unity.”

The Catalan leader’s decision marks the end of two months of negotiations with Junqueras. Mas is bringing forward the elections by almost two years after Spanish Prime Minister Mariano Rajoy refused to engage on talks on Catalonia’s constitutional future.

“By managing to restore the agreement, Mas is giving the process a new lease of life,” Jose Ignacio Torreblanca, head of the Madrid office of the European Council on Foreign Relations, said in a telephone interview.

Catalonia is home to 7.4 million people in the northeast corner of the Iberian peninsula. It has an annual output of €193 billion. That’s about the same as Finland or Scotland, where voters opted to remain part of the UK in last September’s independence referendum.

Mr Mas tried to follow the Scottish example, holding a disputed, non-binding ballot in November in which 2.3 million people voted, with 81 per cent backing a split with the rest of Spain.