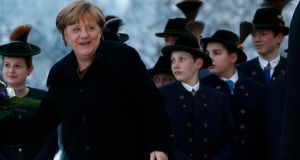 Angela Merkel has rejected angry ally demands to close Germany’s borders in the Bavarian lion’s den – but promised to review her liberal migration policy by mid-February.

Hours after Austria pulled the plug on open borders, piling further pressure on the German leader, the chancellor insisted in the Alpine retreat of Kreuth that a European solution was still the best answer to the migration crisis.

Ahead of an icy meeting with her Bavarian allies, the Christian Social Union (CSU), Dr Merkel said they agreed on the need for a “noticeable and sustainable” reduction in asylum seekers.

But political agreement on how to achieve that remains as elusive as ever.

Aware of her allies’ growing impatience, Dr Merkel flagged three looming dates in her calendar: Berlin-Ankara talks in the German capital on Friday, a London donor conference in February, and the spring European Council.

“After that we can draw an interim balance,” she said in a statement before the meeting, declining to comment directly on Austria’s migration cap.

After accepting 1.1 million asylum seekers last year, the CSU wants an to cap the numbers this year at 200,000 – a demand that is finding growing support among the rank and file in Dr Merkel’s Christian Democratic Union (CDU).

As migration pressures widen the cracks in Europe’s Schengen bloc, fears are growing in the CDU that Germany – and their party – will be dragged down by Dr Merkel’s refusal to change course.

Some CDU officials are thinking the previously unthinkable: that a decade of Merkel is enough. That was the underlying tone of a letter sent by 44 CDU MPs to the chancellery, although no senior figures added their names.

Finance minister Wolfgang Schäuble has taken a tougher migration line more in tune with party feeling. Until now, however, he has always fallen into line and shown loyalty to the chancellor.

Migration was only viable when it had public support, and that, he said, depended on “politicians having the ability to think forward”.

“Forms of control and limitations will be introduced, whatever form they take. They will have to be introduced,” Mr Gauck told the World Economic Forum in Davos.

“I find it difficult to understand,” he said, “when countries whose citizens once experienced solidarity as the victims of political persecution now deny solidarity to those fleeing persecution.”