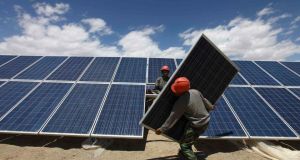 China and the European Union reached a deal today to defuse a multi-billion euro dispute over Chinese solar panels that threatened a wider trade war.

After six weeks of talks, the EU’s trade chief and his Chinese counterpart sealed the deal over the telephone, setting a minimum price for panels from China near spot market prices.

European solar panel manufacturers had accused China of dumping about €21 billion worth of solar panels in Europe last year at below the cost of production, putting European businesses out of business.

Europe planned to impose hefty tariffs from August 6th. But, wary of offending China’s leaders and losing business in the world’s second-largest economy, a majority of EU governments - led by Germany - opposed the plan, which led to the compromise deal.

“I am satisfied with the offer of a price undertaking submitted by China’s solar panel exporters,” he said, referring to an agreement for a minimum price for China’s imports.

An EU diplomatic source said the agreed price was 0.56 cents per watt, near the spot price for Chinese solar panels in July in Europe, according to solar exchange pvXchange.

That may not satisfy EU solar manufacturers who say the price still constitutes dumping, but China has sold solar panels at as low as 0.38 cents per watt in Europe, according to the European Commission, which handles trade issues for EU states.

Under the terms of the deal, China will also be allowed to meet about half Europe’s solar panel demand, if taken at last year’s levels. EU consumption was about 15 gigawatts in 2012, and China will be able to provide 7 gigawatts without being subject to tariffs under the deal, the EU source said.

Chinese solar panel production quadrupled between 2009 and 2011 to more than the world’s entire demand as it took advantage of a growing market for renewable energy in the face of concerns about climate change.

But the global financial crisis and ensuing euro zone crisis have forced European governments to withdraw generous subsidies for solar energy. That, along with Chinese imports pushing down prices, have sent many European solar companies into bankruptcy.

But those concerns have become secondary to the much larger EU-China trade relationship at stake over the panels dispute.

The EU is China’s most important trading partner, while for the EU, China is second only to the United States. Chinese exports of goods to the union totalled €290 billion last year, with €144 billion going the other way.

Responding to the EU’s move to impose duties, China launched an anti-dumping inquiry into European wine sales, which may have led to exporters in France, as well as Spain and Italy, being hit with retaliatory duties.

EU and Chinese diplomats now expect that case to be dropped as a goodwill gesture, although officials declined to comment today.