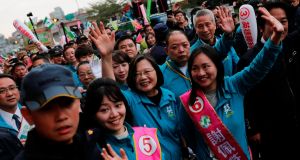 Taiwan’s independence-leaning president Tsai Ing-wen, whose political career appeared all but over a year ago, is now widely tipped to win a second term when voters go the polls on Saturday for presidential and legislative elections.

She can largely thank her arch-nemesis, the Chinese Communist Party, for her dramatic reversal in political fortunes.

In a humiliating public performance in November 2018, Ms Tsai led a group of Democratic Progressive Party officials in a deep bow of apology after the ruling party was handed its biggest drubbing in history in local elections.

Languishing in the polls, she then announced her resignation as party leader. Now she is back and stronger than ever, thanks in no small part to Beijing and the electorate’s concerns about the mainland’s intentions.

China’s president Xi Jinping ratcheted up cross-strait tensions early last year when he appeared to be losing patience with the island’s self-ruled status quo, saying that “the nation is rejuvenating and unification between the two sides of the strait is the great trend of history”.

China would respect Taiwan’s freedoms in a unified “one country, two systems” framework, similar to that in force in Hong Kong, Mr Xi said, but he added they were keeping all military options open to regain control of the island.

“We make no promise to abandon the use of force, and retain the option of taking all necessary measures,” he said.

Ms Tsai refuses to endorse Beijing’s “one-China” policy, which says the mainland and Taiwan are part of one country. Beijing cut off formal ties with her government since she came to power in 2016, increased military manoeuvers around the island, and has encouraged its few remaining diplomatic allies to switch allegiance from Taipei to Beijing, leaving it now with just 15.

The sabre-rattling has unnerved Taiwan’s voters, buoying support for Ms Tsai and her party’s policy of keeping Beijing at arm’s length. Her plight was further bolstered by the ongoing protests and escalating unrest in Hong Kong, which she says proves that a “one country, two systems” model is untenable for the island.

In a widely broadcasted campaign advert for Ms Tsai, scenes of a tranquil Taiwan were juxtaposed with violent images of protesters and police clashing in Hong Kong, urging Taiwan’s 23 million people to cherish their peaceful lifestyle and democratic system.

“Every day, just a few hundred kilometres away, countless young people are arrested, imprisoned, abused, made to ‘disappear’ . . . It turns out ‘one country, two systems’ is autocracy,” the ad says. “This year we finally saw the face of dictatorship, and we truly heard the roar of democracy.”

Taiwan bans the publishing of opinion polls within 10 days of the vote, but Ms Tsai has led by a comfortable margin in several recent polls published.

On the cross-straits issue, according to one recent poll more than 58 per cent of people supported maintaining the status quo, where the island operates its own political system but does not formally declare independence. About 27 per cent favoured independence, while only 6 per cent wanted unification with the mainland.

A spokesman for Ms Tsai said on Friday that her party was not looking to stir trouble with the mainland, but was intent on protecting the island’s liberal political system.

“Maintaining the status quo would be in the best interests of everyone. We will not provoke any conflict with China, but we are absolutely determined to defend Taiwan’s democracy,” he said.

Ms Tsai is running against Kaohsiung mayor Han Kuo-yu of the Kuomintang (KMT) nationalist party and James Soong of the People First Party.

The KMT adopts a China-friendly stance, and Mr Han argues that maintaining good relations with the mainland is essential for Taiwan’s economic prospects and security.

However, in the face of plummeting ratings he was forced recently to publicly condemn the “one country, two systems” model, saying it would be considered for Taiwan “over my dead body”.

At a large-scale rally in downtown Taipei on Thursday, attended by hundreds of thousands of his supporters, Mr Han said: “Only I can make Taiwan strong. Safety for Taiwan, money for the Taiwan people.”

He attacked the DPP’s economic performance and accused it of corruption and meddling with the media.

The DPP – which accuses Beijing of attempting to undermine the elections, including by financially supporting the KMT and secretly distributing “fake news” via media and social media campaigns on its behalf – pushed an anti-infiltration Bill through the legislature last month which bans “hostile external forces” influencing elections. Beijing denies the allegations.

“Democracies around the world are working to prevent infiltration from China,” Ms Tsai said, “and by passing an anti-infiltration act we are joining in this effort to defend our democracy”.