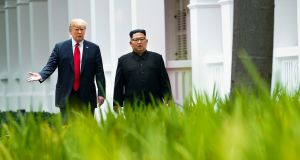 US president Donald Trump and Kim Jong-un of North Korea taking a walk after their lunch on Sentosa Island in Singapore on June 12th. Photograph: Doug Mills/The New York Times

North Korea is continuing to develop its nuclear weapons programme, according to a report by the UN atomic watchdog, raising questions over the country’s commitment to denuclearisation.

In one of the most specific reports on Pyongyang’s recent nuclear activities, the International Atomic Energy Agency observed actions consistent with the enrichment of uranium and construction at the country’s main nuclear site.

“The continuation and further development of the DPRK’s [North Korea’s] nuclear programme and related statements by the DPRK are a cause for grave concern,” the report said.

At a historic summit between Donald Trump and Kim Jong-un in Singapore in June, the US president and North Korean leader agreed to work towards the “complete denuclearisation” of the Korean peninsula.

But experts warned that without a formal deal between the US and North Korea, Mr Kim would continue developing his nuclear and missile programmes.

Duyeon Kim, an adjunct senior fellow at the Center for a New American Security, said: “The Singapore summit wasn’t a nuclear deal and there’s no agreement between Washington and Pyongyang that would encourage North Korea to act any differently.

“Negotiating with North Korea is always going to be a long, bumpy and twisty process, and they are savvy negotiators. They want to hold on to their nuclear weapons as long as possible while extracting as many concessions along the way.”

Speculation is growing that the US secretary of state, Mike Pompeo, is preparing to make a fourth visit to Pyongyang for nuclear negotiations. That trip could lead to North Korea giving the US a list outlining its nuclear arsenal and production facilities, according to the Korea Times.

“North Korea plans to hand over a list of its secret nuclear test sites as well as information about its nuclear warheads to Mike Pompeo when he visits Pyongyang this month,” the paper said, citing an unnamed source. Mr Kim was likely to meet Mr Pompeo face to face, the newspaper added.

Establishing a comprehensive list of the size of the nuclear programme and the locations involved has long been a demand of US negotiators, and would represent a significant concession from North Korea. In return, Pyongyang would likely seek a formal declaration of the end of the 1950-53 Korean war, which ended in an armistice rather than a peace treaty.

North Korean state media has repeatedly mentioned this as a key roadblock to moving talks forward. But without inspectors on the ground, the list could fail to detail all the sites involved in the programme.

Duyeon Kim said: “A nuclear inventory will always be imperfect. North Korea will never give a complete accounting because they want cards in their hand and to maintain some degree of leverage.”

While talks between the US and North Korea have stalled, South Korea has pushed ahead with its own diplomatic efforts. Reunions were held for divided families this week, and Seoul’s defence ministry is considering removing a reference to North Korea as its “enemy” in an annual White Paper. – Guardian