Mining and manufacturing, as well as nuclear programme, boosted economy 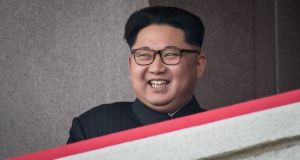 North Korean leader Kim Jong-Un: The country’s growth mainly came from industries such as mining and manufacturing, as well as utilities such as electricity, gas, and water supplies. Photograph: Ed Jones/AFP/Getty Images

North Korea’s economy shrugged off tough international sanctions over its nuclear programme to expand by 3.9 per cent last year, the fastest pace in 17 years, data from South Korea’s central bank has shown.

As well as cranking up tensions in the region, North Korea’s military spend, including investment in nuclear weapons tests and missile launches, helped give the economy a boost, Shin Seung-cheol, an official at the Bank of Korea’s economic statistics department, told the Yonhap news agency.

The growth mainly came from industries such as mining and manufacturing, as well as utilities such as electricity, gas, and water supplies.

The Bank of Korea said it’s the highest growth rate since 1999 when the economy grew 6.1 per cent. Last year, the isolated economy, which is believed to be heavily reliant on fuel and investment from its ideological ally and neighbour China, shrank by 1.1 per cent because of a devastating drought in the country.

“North Korea’s economic structure is very fragile and is not really set up for high growth,” the official said.

China links News of strong growth is likely to bring attention back to China’s links to North Korea. While they are traditionally allies, their friendship has been strained by North Korea’s insistence on pursuing nuclear capabilities despite Chinese requests for it to stop and to join dialogue on the issue.

US president Donald Trump has been putting pressure on China to do more to rein in Pyongyang’s nuclear ambitions but Beijing says it has limited scope for this.

Earlier this month, Mr Trump tweeted how trade between China had grown almost 40 per cent in the first quarter and he chastised Beijing for not doing enough to stabilise the region.

China accounts for 93 per cent of North Korea’s foreign trade, and mineral resources are a key part of their bilateral trade.

North Korea has been struggling to bring in foreign currency since the UN Security Council passed a resolution in November that tightened sanctions, including cutting the country’s coal exports, after it conducted its fourth and fifth nuclear tests.

Despite slowing trade, North Korea has still been able to develop what it says is an intercontinental ballistic missile capable of reaching the US.

The South Korean unification ministry has renewed its call on North Korea to accept its offer of dialogue in the demilitarised zone that divides the two countries since the Korean War (1950-53) ended without a peace treaty.

North Korea’s main newspaper, Rodong Sinmun, said it was “nonsense” for Seoul to hope for improved relations as long as it continued to back sanctions and hold joint naval drills with the US.