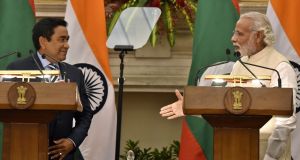 India’s efforts to firm up strategic, political and military ties with Indian Ocean region states to counter China’s growing naval presence in the area have hit a number of roadblocks.

It is locked in a standoff with the Maldives, which has asked India to withdraw, by the end of June, the two military helicopters it gifted to the island republic in 2012-13 for coastal surveillance, reconnaissance and search-and-rescue missions.

Security officials in New Delhi said the Maldives had refused to extend the letters of exchange for these helicopters. The helicopters are being operated from the archipelago’s Laamu and Addu atolls by six Indian navy and Indian coast guard pilots.

One of the letters of exchange for the helicopters had elapsed in May while the other is due to expire by June 30th.

Maldives president Abdulla Yameen’s government had also declined to renew the pilots’ visas and those of 10-12 Indian technicians responsible for maintaining the platforms that were gifted by Delhi to the Maldives national defence force.

Bilateral ties between India and Maldives deteriorated further after Yameen declared an emergency in his country, resulting in Malé withholding work permits for thousands of Indians seeking work on the island republic.

More startling are Maldivian company job advertisements, which recommend that Indian nationals need not apply as they would not be given work permits.

In December 2017, Maldives signed 12 agreements with China, including a pact to promote Beijing’s One Belt, One Road (OBOR) initiative, aimed at expanding economic and strategic ties with Indian Ocean region countries.

“The Maldives asking India to retract its helicopters is a major setback to Delhi’s military and diplomatic policies in the region,” said Rahul Bhonsle, head of Security Risks Asia, a Delhi-based defence management consultancy.

It badly shows up India’s inability in countering China’s growing influence in the region, he added.

In a related development, Seychelles has revoked its earlier offer to India to allow it to construct and operate a military base on one of its islands in a bid to boost Delhi’s presence in the Indian Ocean region.

Seychelles president Danny Faure recently declared at a press conference that his January 27th agreement with India to develop and operate the naval base on Assumption Island would “not move forward”.

“In next year’s budget, we will put funds for us to build a coast guard facility on Assumption [Island] ourselves,” Faure said at a press conference in Victoria, the Seychelles capital. “It is important for us to ensure that we have a military post in the area,” he added, signalling that the bilateral deal signed with India for the Assumption Island base had been abrogated.

Faure said he would not table the agreement for ratification in the Seychelles national assembly, as the country’s powerful opposition strongly opposed any Indian or other military presence on the archipelago.

He also made it clear at the press conference that the issue of India building an airstrip and other facilities on Assumption Island in order to base its military personnel there would not feature in talks with Indian leaders during his visit to New Delhi on Monday.