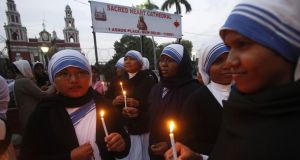 Since last May, seven churches in New Delhi and surrounding areas have been vandalised and two convents attacked. In several instances, Hindu hardline groups linked to the BJP are reportedly responsible for the continuing anti-Christian violence, such as the demolition this month of a Catholic church under construction in northern Haryana state, 175km from Delhi.

The church was levelled and its cross was torn down and replaced with a flag emblazoned with “Shri Ram”, hailing the widely revered Hindu god.

Officials in eastern Bengal state, where a 71-year old nun was gang raped in a convent on March 14th, claimed that fanatical Hindus, waging a campaign to convert Muslims and Christian to Hinduism, were responsible for the crime.

“Religious intolerance in the name of ghar wapsi [‘homecoming’] is at work,” Bengal’s urban development minister Fihad Hakim said after the nun’s rape at Ranaghat, 80km from Kolkata (formerly Calcutta), the port city made world famous by Mother Teresa.

Hakim was referring to the campaign organised late last year by Hindu hardline groups, associated with the BJP, in which over 2,200 people, mostly Muslims, were converted to their religion.

“Though the attacks are by fringe elements of Hindu organisations, they’re part of the BJP,” said Margret Alva, former MP and provincial governor.

Senior BJP leader Subramaninam Swamy exacerbated matters by recently declaring that gods lived only in Hindu temples and not in churches or mosques, Speaking at a public function in northeastern Assam state, the former Harvard University economics professor said that churches and mosques were “mere buildings for offering prayers” and could be demolished at any time.

Christians,who make up about 24 million or 2.3 per cent of India’s population of over 1.25 billion, have expressed fear at the persecution, which some claim will only proliferate under BJP rule.

The BJP and its numerous affiliates frequently state that India can only be unified via Hindutva or Hindu hegemony and that Muslims and Christians need to heed this dogma carefully.

Some 827 million Hindus comprise around 81 per cent of the country’s population. About 14 per cent are Muslims and the remainder Sikhs, Buddhists and other smaller communities such as Jains and Zoroastrians.

“Today I feel threatened, not wanted, reduced to a stranger in my own country. I feel I am on a hit list,” said Julio Robeiro, a Christian and a highly respected and renowned police officer.

“I was born in this country and so were my ancestors some 5,000 years ago,” said the 86-year old, who battled Sikh insurgents in northern Punjab state in the 1980s and was twice seriously injured in assassination attempts.

“If tested, my DNA will not differ markedly from Mohan Bhatwat’s”, he said, referring to the head of the Hindu revivalist and semi-militarist Rashtriya Swamseval Sangh (RSS) or National Voluntary Cops that provides the BJP its spiritual guidance.

The founding principle of the 90-year-old, right wing, RSS is to keep Hinduism pure from influences such as Islam and Christianity. Modi, the prime minister, was an RSS pracharak, or full time worker, having joined it as a teenager.

The highly disciplined RSS is widely believed to be responsible for catapulting the BJP into power last year, after its cadres campaigned tirelessly for Modi, helping the party secure a parliamentary majority in an era of coalition governments.

Modi recently his silence on the repeated religious attacks and conversion attempts and declared that his government would not allow any religious group – majority or minority – to incite hatred against other communities. But thereafter anti-Christian violence continued unimpeded and the prime minister has yet to conclusively condemn it.

Most Indians concede that Christians punch well above their weight in India, holding senior positions in numbers that are in inverse proportion to their small numbers.

They run the best educational institutions, hospitals and hospices for the terminally ill and homes for the poor and destitute, all patronised largely by Hindus.

“It is tragic that these (Hindu) extremists have been emboldened beyond permissible limits by an atmosphere of hate and distrust with consequences that must be avoided at all costs,” Ribeiro stated.