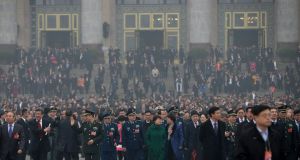 Delegates leave the Great Hall of the People after attending a session on Friday ahead of Saturday’s opening of China’s National People’s Congress (NPC) in Beijing. Photograph: Andy Wong

Economic reform will top the agenda at China’s biggest political event, the annual National People’s Congress (NPC), which gathers over 3,000 Communist Party delegates in the Great Hall of the People.

As smog choked the capital, red flags lined Tiananmen Square and volunteers with red armbands kept foot traffic moving in the roads leading to the vast concourse, as delegates, many in traditional garb or military uniform, gathered for the weeklong event starting on Saturday.

Air pollution made visibility poor, but the political message was crystal clear ahead of the gathering, which is primarily aimed at giving rubberstamp approval to policies and budgets already decided by the leadership, including the 13th Five-Year Plan, an important economic blueprint which gives indications of China’s future direction.

Cadres were urged to show solidarity with Xi Jinping, general secretary of the party as well as president and military chief, as he builds a moderately prosperous society. Xi’s profile has never been higher.

Advance propaganda in the media, which Xi recently demanded serve the party, not the government, has praised his hard line on corruption and dissent, and presented the paternalistic side of his rule, personified by “Xi Dada”, or “Uncle Xi”.

Described in song as “a man full of heroism with an unyielding sprit … who will keep moving forward regardless of the challenges”, dozens of online sites host videos of groups of women dancing to the Xi Dada ditty.

There are kudos for his Belt and Road instructure initiative, linking China to Europe via Central Asia, and the China-driven Asian Infrastructure Investment Bank. “All of society must be united by a series of important speeches by Xi on the Chinese dream of national rejuvenation,” ran a story in the Communist Party periodical Qiushi.

This year’s defence budget is set to rise by between seven and eight per cent, its lowest rate since 2010. The figure is due to be announced on Saturday; last year defence spending was budgeted to rise 10.1 per cent to 886.9 billion yuan (€124 billion).

The overarching challenge is to give the economy a boost, as growth is increasing at its lowest rate in a quarter of a century as the government tries to retool things to make China more of a services and consumer economy, and less of a low-cost manufacturing centre.

In the run-up to the NPC, the government announced that 1.8 million workers in state-owned coalmines and steel factories would lose their jobs, and some believe this number could rise to nearly six million in the next three years.

The xiagang, or laid off, workers toil in “zombie” state-owned enterprises. Implementing such swingeing job cuts could lead to political unrest, something Beijing wants to avoid, and while the government is setting aside €21 billion to compensate laid-off workers, enforcing stability is something the party will take very seriously.

Premier Li Keqiang is due to unveil the government’s GDP target on Saturday, and the figure is expected to be in a range between 6.5 and 7 per cent, compared with the “approximately 7 per cent” target he announced last year.

Factions within the party are opposed to reform at such huge social cost and the challenge for Xi is to keep the party united behind him, hence messages such as the one on the Xinhua news agency calling for “unwavering conformity with top leader Xi Jinping”.

A woman surnamed Feng, who works as a medical equipment sales representative, bemoaned the increased security and traffic disruption that the 33-year-old would have to deal with in the next week or so.

“I am a bit worried about the outlook for the economy, because share prices keep falling, and the government will have to spend more time and energy to raise the economy. But I don’t have any great expectations about the NPC,” she said.

“I’d like to see something practical, like more doctors or better healthcare. I won’t be watching the NPC on TV, but online you can’t avoid it,” she said.

A woman who asked her name to be given only as Lily said she didn’t care about the NPC as the policies would be implemented regardless.

“We are not the decision makers. No matter if it is good or not, it will be implemented. When are people interested in NPC? The answer is when it directly relates to you and when you have to right to speak. I don’t think this is the case in China,” she said.

She cited the case of Ren Zhiqiang, the property tycoon whose social media accounts were closed for criticising the leadership. “Look at what happened to Ren. I am very disappointed they shut Ren’s Weibo account for his comments,” she said.

The annual gatherings are known as the “two meetings” and refer to the meeting of the political advisory body, the Chinese People’s Political Consultative Conference (CPPCC) and the NPC.

This year it looks like the turn of the “Four Consciousnesses”, which according to the Communist Party magazine Qiushi involve “consciousness of the ideology, the whole, the core and the line”.

“The fundamental principle of strengthening consciousness is to follow the ideology, political thinking and deeds of the Communist Party of China Central Committee, with Xi as general secretary,” Liu Yunshan, a member of the politburo standing committee, said in the run-up to the meeting.