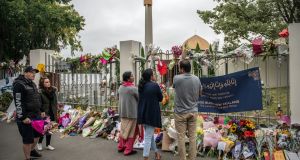 Worshippers and well wishers visited a New Zealand mosque on Saturday as it reopened for the first time after dozens of people died there in a mass shooting.

Hundreds of people stopped at the Al Noor mosque in Christchurch to lay flowers or pray after police removed a cordon and those running the mosque decided to reopen. Inside the mosque, there were few signs of the carnage from eight days earlier.

Crews had replaced windows that worshippers smashed in desperate attempts to escape when the attack happened during Friday prayers. Bullet holes were plastered over and painted.

Shagat Khan, the president of the Muslim Association of Canterbury, said they had not planned to open the mosque so soon but when they saw the crowds gathering after the police cordon was removed, they decided to allow people to enter in managed groups “so the mosque will be alive again”.

“Those who lost their families are of course quite emotional,” he said. “And those who were present here during the incident, of course the memories come back. The flashbacks.”

A total of 50 people were killed at two mosques in Christchurch on March 15th, in the nation’s worst terrorist attack. Australian Brenton Tarrant (28) has been charged with murder and is scheduled to make his next court appearance on April 5th.

Abdullahi Ibrahim Diriye, the uncle of the youngest victim of the shooting, three-year-old Mucaad Ibrahim, visited the mosque with the boy’s father.

“Always he was a happy boy, and he liked every person he met, not only Muslims,” Mr Diriye said.

Prince Hassan bin Talal of Jordan, who travelled to New Zealand to pay his respects, hugged a man at the entrance of the mosque and told him to “be patient”.

“He was crying deeply from his heart for a loved one he had lost,” the prince later explained. “And I was saying, this is God’s will, be patient. Because only through patience can you endure.”

Prince Hassan said in the Middle East there have been wars every decade.

“To feel that this form of violence and cruelty is visited on you, living in this idyllic part of the world, is deeply, deeply moving,” he said.

Human dignity is being assailed on all fronts by extremists, he said, and people need to stand together as human beings.

Officials say four Jordanian nationals died in the attack, while a four-year-old Jordanian girl is also recovering in an Auckland hospital. - PA