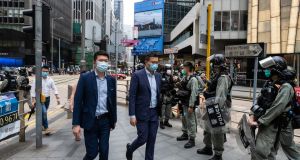 China’s legislature has approved a decision to force a controversial national security law on Hong Kong, in an extraordinary and unprecedented move aimed at bringing the semi-autonomous territory further under Beijing’s control.

On Thursday, China’s National People’s Congress voted and passed a draft decision that paves the way for anti-sedition laws to be directly enacted in Hong Kong, bypassing the semi-autonomous territory’s legislature. The Legislative Council (LegCo) has been unable to pass similar legislation on its own because of widespread public opposition.

Now, a detailed law will be drafted and could be enacted in a matter of weeks, according to Chinese state media.

The move by China has prompted widespread condemnation and anxiety inside and outside Hong Kong about Beijing’s plans for the semi-autonomous territory. Riot police were deployed across Hong Kong to stop any potential protests.

The vote comes after at least 360 people were arrested in Hong Kong on Wednesday, as police fired pepper pellets and detained suspected protesters in a series of skirmishes that broke out across the city. Demonstrators were protesting against a bill to criminalise disrespect of the Chinese national anthem and the looming national security laws. On Thursday, debate over the national anthem bill was suspended after a lawmaker opposing the law dropped what was believed to be a rotting plant onto the chamber’s floor.

Following the protests, US secretary of state Mike Pompeo said his government would revoke Hong Kong’s special trade status as separate from China.

“While the United States once hoped that free and prosperous Hong Kong would provide a model for authoritarian China, it is now clear that China is modelling Hong Kong after itself,” he said.

The move, part of legislation passed by the US last year to pressure Beijing into protecting Hong Kong’s autonomy, promises to further destabilise already deteriorated relations between the US and China. Under the law, the US is required to conduct an annual review of Hong Kong’s governance and whether it should continue to be treated as separate from China in trade and economic ties with the US.

“No reasonable person can assert today that Hong Kong maintains a high degree of autonomy from China, given facts on the ground,” Mr Pompeo said.

On Thursday Hu Xijin, editor of nationalistic state-run tabloid the Global Times, said on Twitter that it was not up to the US to decide if Hong Kong was autonomous. He wrote in a longer post on Weibo: “American politicians like Pompeo presume that the fate of Hong Kong lies in their hands.”

“If Washington wants to play this card, let them play it – Hong Kong is a major international finance hub because of its special relationship to the mainland’s massive economy. This is more important than the attitude of the US.”

Chinese and Hong Kong officials have promised that the law will only target a “narrow set of acts” and the vast majority of Hong Kong residents would not be affected.

Legal observers and human rights advocates say the national security laws will threaten the city’s freedoms and rights as promised under the “one country two systems” framework.

“In China they never really define what exactly is ‘national security’. So the law could change according to political expediency or political necessity,” Johannes Chan, a legal scholar in Hong Kong, told public broadcaster RTHK, adding that it was “naive” to believe the law would only affect a small group of people.

The unprecedented move by Beijing also represents a worrying escalation of interference in Hong Kong affairs and violates the territory’s de-facto constitution the Basic Law, according to legal experts.

“The Chinese communist party is painting a picture to make it seem like it is abiding by the Basic law, but it is not. They’re imposing a draconian law which can be used to silence dissent in Hong Kong and infringe on freedoms guaranteed to Hong Kongers,” said Frances Eve, deputy director of research at Chinese Human Rights Defenders. –Guardian

Covid-19: Calls for flights from the US to be suspended from opposition parties

1 ‘I thought it was a hoax’: Patient dies after Texas Covid party
2 Johnny Depp tells court Amber Heard threw ‘haymaker’ punch at him
3 US passengers fly into Dublin: ‘I’m here for six days. I guess I’ll have to stay inside’
4 Maureen Dowd: Biden has his limitations but he’s no Trump
5 Coronavirus: No new deaths and 11 further cases reported
Real news has value SUBSCRIBE