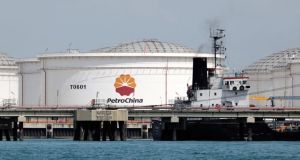 The euphemism refers to corruption by state-owned enterprise managers. With the investigation, China’s new leaders appear to be asserting their authority over the country’s oil giant.

Mr Xi took office in November and promised he would tackle widespread official corruption, one of the prime causes of public anger.

Impediment
China’s state-owned enterprises are also seen as an impediment to Mr Xi’s plans to reform the economy, and he is keen to tackle them before this November’s crucial Communist Party plenum, which will come up with an economic reform plan.

To date, the investigation has seen the detention of five former and current top oil executives, including Mr Jiang, who was named as recently as March to head SASAC, a ministerial-level body run by China’s cabinet that is directly responsible for more than 100 state-owned companies.

Recent months have seen several high-profile corruption cases against high-ranking officials, including senior party official Bo Xilai, who was put on trial last month for alleged bribery, embezzlement and abuse of power. He is awaiting the verdict.

The investigation into Mr Jiang comes after similar investigations were announced over the past week into four executives at CNPC.

Fallen foul
Other senior figures at state-owned enterprises have fallen foul of the investigation. The general manager of state-owned phone company China Mobile was detained in the southern province of Guangdong last month, also for “discipline violations”.

In July, ex-railways minister Liu Zhijun was given a suspended death sentence for bribery and abuse of power.

Most explosive of all are reports that the leadership has endorsed a corruption investigation into Zhou Yongkang, a former security czar and CNPC general manager with a power base in the oil industry.

For Mr Xi, fighting corruption is essential if the party is to maintain its 64-year hold on power. He has said anti-corruption efforts should target low-ranking “flies” as well as powerful “tigers”.

“The ‘reform and opening’ agenda is back on,” wrote Diana Choyleva of Lombard Street Research. “The pace of reform is likely to be much faster than before, although Beijing will have to overcome powerful vested interests.”