China Today: Xingtai, one of the world’s most polluted cities

While toxins belch from power plants, children in nearby Beijing compare brands of mask 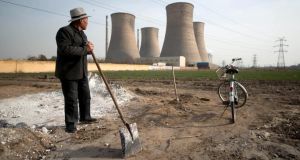 Power plant in Xingtai, southern Hebei province, south of Beijing. Xingtai produces some 20 million metric tonnes of coal annually and is one of the world’s most polluted cities. Photograph: Ed Jones/AFP/Getty Images 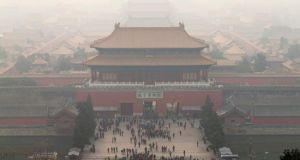 The Forbidden City in Beijing shrouded in fog on. Beijing’s proximity to the industrial heartland of Hebei province is generally given as an explanation for the high-levels of pollution in China’s capital. Photograph: Rolex Dela Pena/EPA 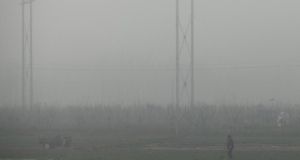 A farmer working in the fields is barely visible due to high pollution levels, in Hebei province, China. Seven cities in Hebei are among the 10 most polluted in China. Photograph: Diego Azubel/ EPA 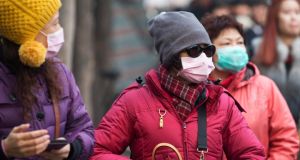 Based on the most reliable air-pollution index in China, the country’s most polluted city is Xingtai, one of the oldest cities in northern China, with a history stretching back 3,500 years.

It was a major city during the Shang dynasty, two millennia before the birth of Christ. These days it is a friendly, but hopelessly smog-clouded, heavy-industrial city in Hebei province.

A photograph of a couple wearing masks playing ping-pong in the thickest smog you can imagine is one of the defining images of China’s war against pollution in recent years. A war it appears to be losing.

Seven cities in Hebei are numbered among the 10 worst polluted in China, including Shijiazhuang, Baoding, Handan, Tangshan and unlucky old Xingtai, meaning that they are also some of the most polluted cities in the world.

The situation in the air is bad enough, but what’s in the soil and the water is equally worrying.

Xingtai has a population of around seven million people and is 396 kilometres from Beijing. The air tastes of petrol here, even on a relatively clear day.

Since October 16th, a citizen group in Xingtai has run the Xingtai Anti-Pollution Campaign, and in one month it has brought 22 criminal cases against companies it suspects of polluting. Twenty-three people have been arrested.

Xingtai is also home to Jizhong Energy Resources, which operates coal mines to feed coal power plants that are choking the north China plain. This grim facility, which is actually a cluster of plants and mines, is one of the most heavily polluting factories on the planet.

People in Xingtai are desperate.

Writing on the Sina Weibo network, Shanzhilian 68 called for a boycott of industrial products from Hebei. “Give us back the blue sky. What is the Xingtai mayor doing? We should limit the production or stop production from the factories here. It makes me want to cry when I see on [state broadcaster] CCTV that Xingtai is the most polluted city in China.”

Another online commenter, Xioneweilong, said the pollution was having serious health effects: “In this polluted weather, most of the children in the hospital have tuberculosis. Please get the polluted factories out of Xingtai.”

Beijing’s proximity to the industrial heartland of Hebei province is often given as the reason why pollution is so bad in the capital. In the early winter, the coal-fired power plants start cranking up production to meet increased demand for heating, and the skies turn a yellow-tinged grey.

Hebei has very little rain, so the cities of Handan, Shijiazhuang, Baoding and, of course, Xingtai are all in a poor position regarding the flow of air. They all lie east of the Taihang Mountains, and Xingtai is the worst-placed.

But the geographical location is secondary. The main problem is the unfeasibly large amount of air pollutants in the environment. These cities are home to iron and steel factories, cement plants, building materials makers, petrochemical industries and electro power plants.

Hebei vice-governor Yang Chongyong said last year that the city would target these industries to reduce emissions, and much work has been done, but it’s not an easy problem to solve.

Ma Jun, formerly a senior figure in the state environmental protection agency and currently head of the Institute of Public and Environmental Affairs lobby group, said he believed many factories in the Hebei region were polluting far beyond the national limits.

“The curbs only went into effect during the [Asia-Pacific Economic Co-operation (Apec)] summit because they were ‘political assignments’, but everything is back to normal now,” Ma told the South China Morning Post.

Back in Beijing, in our family, we have an established modus operandi when the sky looks grey and yellowish outside. The first is to reach for the Air Quality Index app on our smartphones, which tells us the city’s average reading for various pollutants, the most nefarious of which is PM2.5, the microparticles most damaging to health. On a couple of occasions, the reading has gone beyond 500, off the charts.

We then crank up the air purifiers in each room, blasting out clean air. They are loud, but we encourage the children to practise the piano, or turn up their Fifa 15 video game, to mask the hum, which is a grim reminder of the toxic air outside the window. The dogs are restless, as we can’t expose them to the foul air for any extended period. It can mean grim days when conditions deteriorate at the weekend.

We make do, by inviting friends over for brunches that sometimes extend into full-day pollution-avoidance sessions.

On weekdays, the children wear masks going to school and are warned not to take part in outdoor activities. This is less of an issue at my son’s school, which has an oxygenated dome so that it can continue with sports activities on the smoggy days. It’s science fiction.

In every classroom of my daughter’s school, air purifiers, largely funded by concerned parents, are running.

On the truly awful days, physical education classes and outdoor exercise at kindergartens and schools are called off, particularly if there are hazardous readings more than three days in a row.

For the past few years we would compare the US embassy readings with local government levels, and the embassy’s figures were routinely higher. However, during the Apec summit, the apps carrying the US data were told to stop using it, and things got difficult.

It used to be that only foreigners cared about pollution, but now Chinese people are donning masks, some of them fetching fashion items similar to the funky masks worn during the Sars outbreak in 2002, and it is emerging as a political issue.

Li Junfeng, director general of the National Centre for Climate Change Strategy and International Co-operation, described the air in Beijing earlier this year as being at “an unbearable stage”.

“It’s like a smoker who needs to quit smoking at once otherwise he will risk getting lung cancer,” he said.

Surprise deal between China and US

The big-picture backdrop to the environment debate here is the somewhat surprising deal between China and the United States to strengthen their co-operation on cutting greenhouse gases and their pledge to reduce emissions, raising the possibility of a global deal on climate change in Paris next year.

President Xi Jinping and President Barack Obama held secret talks at the Zhongnanhai leadership compound in central Beijing. Tellingly, their deal came on what people still, weeks later, jokingly refer to as an “Apec blue” day, when the skies over the capital were cleared before the arrival of regional leaders through the temporary closure of coal-fired power plants, the shuttering of factories and restrictions on traffic.

As the world’s two biggest economies, China and the US are the world’s two largest polluters, producing about 45 per cent of the world’s carbon dioxide between them. China agreed a target for its emissions to peak by 2030, although it did not give a precise percentage, having previously said it would reduce its carbon intensity by up to 45 per cent from 2005 levels by 2020 . The US said it would step up the pace of its efforts to combat climate change, setting a fresh target of reducing emissions by 26 per cent to 28 per cent by 2025, compared with 2005 levels.

This came ahead of the United Nations climate conference in the French capital next year, and just as environmental groups were looking for leadership from the two main drivers of climate change.

It all seems a long way away from our hallway, where we compare the relative advantages of Respro versus Totobobo masks. But a solution won’t come quick enough for us to ditch the face masks any time soon. Tomorrow: Clifford Coonan reports from Hami in eastern Xinjiang on escalating ethnic tensions and how they are being dealt with by Beijing .