10 quotes: Philippines president Rodrigo Duterte in his own words 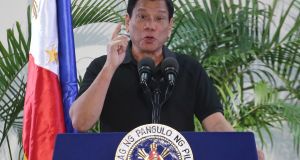 Since he came to power on June 30th, Philippines president Rodrigo Duterte has repeatedly shocked the world with a series of outrageous quotes. The following are 10 of the most notable.

Speaking of ongoing war on drugs which has seen thousands of extrajudicial killings:

On the rape/murder of 36-year-old Australian missionary Jacqueline Hammill after a prison assault in Davao City in 1989:

“When the body was taken out, it was already wrapped. I looked at her face. I said, ‘F**k, she looks like an – like an American actress, a beautiful one … I said: ‘F**k, what a waste’. What went through my head was that they raped her. That everyone had lined up to rape her. I got angry. That she was raped? Yes, that too. But it was that she was so beautiful – the mayor should have been first. What a waste.”

On five-hour traffic delay in already traffic-thronged Manila during a visit by Pope Francis:

After his daughter Sara said she had been raped, Duterte described her as a drama queen:

After EU criticises extrajudicial killings of thousands suspected of involvement in the drugs trade, Duterte raises his middle finger in an insulting gesture - and repeats the message the following day:

“Even the EU is scolding me … When I was mayor, that was OK, but it is different now because I am the president. Why would you insult me? It is as if I am your subordinate … F**k you.”

Message to US president Barack Obama after the US criticised his administration’s human rights record:

“Son of a whore, I’ll curse you at that forum. Don’t do anything like that to me.”

“Forget the laws on human rights. If I make it to the presidential palace, I will do just what I did as mayor. You drug pushers, hold-up men and do-nothings, you better go out. Because I’d kill you. I’ll dump all of you into Manila Bay, and fatten all the fish there.”

When compared to US presidential candidate Donald Trump:

Speaking after a meeting with US ambassador Philip Goldberg:

“We were talking to [US Secretary of State John] Kerry. He’s okay but I had an argument with their ambassador, that homosexual. Son of bitch, he really annoys me.”

On territorial disputes with China in the South China Sea:

“I will ride a jet ski [to the Spratlys] while bringing the Philippine flag. I will plant the flag on the runway and tell the Chinese authorities, ‘Kill me.’”