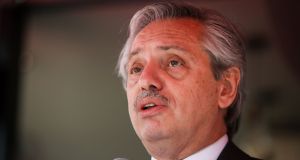 Alberto Fernandez’s pledge was welcomed by equality campaigners in Argentina, where the struggle to end discrimination and violence against women has sparked a mass movement including a large number of women’s marches. Photograph: Raul Martinez/EPA

Argentina’s president-elect, Alberto Fernandez, has promised he will move to legalise abortion after taking office on December 10th.

He will send a bill to congress which, if approved, would make Argentina the first major Latin American nation with legalised abortion. The ruling in the 45 million-strong country would follow decisions by its much smaller neighbour Uruguay, which legalised the practice in 2012, and Cuba in 1979.

“I am an activist for putting an end to the criminalisation of abortion,” Mr Fernandez said in an interview with the daily Pagina. “There’s going to be a bill of law sent by the president.”

The announcement would represent a major U-turn for official policy in Argentina, which has steadfastly opposed legalisation. A bill presented by women’s rights activists was rejected by the senate by 38 votes to 31 last year, after the president at the time, Mauricio Macri, refused to endorse it.

Mr Fernandez’s pledge was welcomed by equality campaigners in Argentina, where the struggle to end discrimination and violence against women has sparked a mass movement including a large number of women’s marches.

“I still can’t believe it’s happening,” said Ana Correa, a member of the #NiUnaMenos (“Not one less”, meaning not one more woman lost to male violence) collective, in a country where every 30 hours another woman becomes the victim of “femicide”, an Argentinian legal term encompassing domestic violence, “honour” killings and other categories of hate crimes against women.

“The women’s movement is one of the most important political occurrences of the last four years,” Ms Correa said, “and I think this time, with the backing of the new president, a legal abortion law will be finally enacted.”

Pope Francis, who remains involved in the politics of his home country, has made no secret of his opposition to legal abortion and reportedly asked anti-abortion legislators to pressure fellow lawmakers to reject last year’s bill.

Argentina would also stand out as the first predominantly Catholic nation in the region – 92 per cent of the population declared themselves Catholic in the last 2011 census – to legalise abortion.

In Uruguay, 41 per cent of the population is Catholic and in Cuba it is 60 per cent. Abortion is also legal in South America’s English-speaking Guyana.

“I don’t want this debate to be a dispute between progressives and conservatives, between revolutionaries and retrogrades, this is a public health issue,” said Mr Fernandez. – Guardian