West Africa confirmed clear of Ebola by WHO 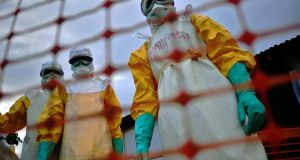 The World Health Organisation has announced an end to the latest flare-up of the Ebola virus in Liberia, a milestone that marks the first time since the epidemic began in 2013 that there have been no known cases of the disease in West Africa.

It said, however, that it was too soon to declare an end to the epidemic that killed more than 11,300 people out of 28,600 cases. More flare ups are expected because the virus can persist in survivors for up to a year and be transmitted through sex and perhaps other means.

“All known chains of transmission have been stopped in West Africa,” the WHO said in a statement.

The news was a potential turning point in the fight against a disease that began in the forests of eastern Guinea in December 2013, spread to Liberia and Sierra Leone, and at its height in October 2014 sparked global fear about the disease.

There were cases in seven other countries including Nigeria, the United States and Spain, though almost all deaths were in the three West African states.

Governments and international health organisations joined local health workers to combat the disease and new cases dwindled due to public health campaigns, an effort to trace and isolate potential sufferers and the safe treatment and burial of patients and victims.

Thursday’s declaration comes because it is 42 days since Liberia’s last Ebola patient tested negative. The country had previously declared itself virus-free in May and September of 2015 but each time a fresh cluster of cases appeared.

“We are now at a critical period in the Ebola epidemic as we move from managing cases and patients to managing the residual risk of new infections,” said Bruce Aylward, WHO’s Special Representative for the Ebola Response.

“We still anticipate more flare-ups and must be prepared for them.”