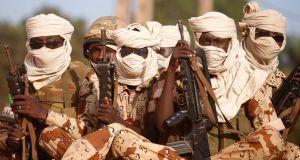 Chadian soldiers sit with guns on a vehicle as they drive in Bangui at the weekend. Photograph: Goran Tomasevic/Reuters

UN secretary general Ban Ki-Moon stopped in the Central African Republic (CAR) on his way to today’s commemoration in Kigali of the 20th anniversary of the beginning of the Rwandan genocide.

“The international community failed the people of Rwanda 20 years ago,” Mr Ban said in Bangui. “And we are at risk of not doing enough for the people of the CAR today . . . Some say this is a forgotten crisis. I am here to help make sure the world does not forget.”

However, 16 months after the Muslim Seleka rebellion started in northeastern CAR, the world has done precious little. Thousands have been killed and a million driven out of their homes.

The anti-balaka, the Christian militia formed in retaliation against the Seleka, are now in the ascendant. Suspected Muslims are attacked, dismembered and burned alive in the streets of Bangui. There are confirmed reports of cannibalism and the beheading of children.


Conrad’s vision
To borrow the title of Joseph Conrad’s 1899 novella about barbarity in neighbouring Congo, CAR has become the heart of darkness. Nature colludes in the country’s primeval strangeness. Orange and black iguanas skitter across the tarmac at Mpoko airport. Steam rises from the Ubangi river at dusk, which resembles “an immense snake uncoiled”, in Conrad’s words. The savannah and jungles are immense and impenetrable.

The Rwandan parallel is both apt and misleading. Rwanda is tiny, less than a third the size of Ireland, with a population of eight to 10 million before the genocide. CAR is a huge country, larger than France and Belgium combined, with a similar population to Ireland.

The war has displaced Muslims to the east and Christians to the west. Physical separation mitigates against genocide on the scale of what happened in Rwanda. And CAR’s militiamen lack the methodical organisation of the Interahamwe, who carried out massacres in Rwanda. Yet anti-balaka militiamen are explicit about their desire to “kill all the Muslims”. The intent is present, even if genocide is not feasible in current circumstances. If the Seleka receives outside help and regroups, the worst becomes possible. In the meantime, the slow drip of killing continues.

A few days ago, an Irish radio station cancelled an interview with me about CAR. “We know it’s important, but a story has just broken in Dublin about cuts to Irish railway lines,” the production assistant said. Could there be a better description of the world’s priorities?

Militant do-gooders such as the philosopher, Bernard-Henri Lévy, and the former French foreign minister, Bernard Kouchner, long influenced politicians with their belief in the “duty to intervene”. Somalia, Iraq, Afghanistan and Libya put paid to any notion that saving failed states could be easy or ultimately effective. George W Bush gave “nation-building” a bad name.

In CAR, “the state is in a situation of complete collapse”, says CAR’s interim president Catherine Samba-Panza. Mr Ban submitted a report to the Security Council last month advocating a 12,000-strong peacekeeping force with a civilian component, to begin building a state. The cost has not been estimated, but it would be colossal, at a time when UN agencies struggle to raise the funds to meet basic humanitarian needs.


Illusory peacekeeping
The UN peacekeeping force, which may materialise by mid- September, is supposed to take over from the French Sangaris and African Union’s Misca operations. After months of tergiversation, the EU finally promised last week to deploy 800 peacekeepers. The idea that 13,000 international peacekeepers can disarm some 120,000 Central African militiamen – based on figures provided by militia leaders – is clearly an illusion.

Militia leaders are susceptible to the threat of trial by the International Criminal Court. That’s how Unicef gained access to a small percentage of the country’s more-than 6,000 child soldiers. And fear of the ICC has forced François Bozizé and Michel Djotodia, the CAR’s last two presidents and the power behind its militias, to take a back seat in the conflict. Endemic corruption and the population’s propensity to attack peacekeepers make intervention even more unattractive.

If there is no military solution to the conflict in CAR, the answer must be economic and political. French authorities are believed to be leading negotiations. The militia leaders demand a share of political power – which in CAR means big money – to call off the killing. If this war re-empowers the men who initiated the slaughter, it will have been for naught.

The 20th century saw genocides against Armenians, Jews, Cambodians, Bosnians and Rwandans. This century has to do better. But if CAR shows the risks of genocide are ever present, it also demonstrates how difficult it can be to prevent it. While our leaders thrash out the options, the least we can do is make our interest known, and send that contribution to one of the aid agencies struggling so valiantly to alleviate the suffering.
Series concluded