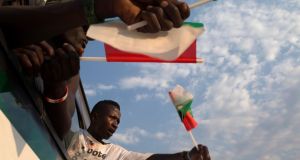 A number of African presidents have suggested a new continental court is required for dealing with regional leaders accused of serious abuse of power, instead of the International Criminal Court.

But the arguments sound insincere in light of the current situation in Burundi, where a presidential election is set to take place today.

Comments such as a recent one by Malian president Ibrahim Boubacar Keita – it is “up to Africans, not Europeans or Americans, to judge their leaders” – are regularly trotted out by African Union (AU) heads of state who say the ICC is biased against them.

Keita’s remarks were prompted by the row that erupted when South Africa’s government disregarded a local high-court order to detain Sudan’s president Omar al-Bashir in early June, when he was in Johannesburg for an AU summit.

Until now, African leaders have never judged their own. However, the trial scheduled to begin yesterday of Chad’s former dictator, Hissene Habre, in Senegal, over his regime’s brutality is about to change that.

Rights groups say 40,000 people died during Habre’s seven-year reign. He will be tried by the Extraordinary African Chambers, a special court established by the AU under an agreement with Senegal.

This test case for African justice will attract global attention, as a regionally run court with a mandate similar to the ICC’s is ultimately desirable. But despite Habre’s trial, Africa’s recent history at holding leaders to account does not inspire confidence the AU can be effective in policing its own.

For instance, the crisis in Burundi has the potential to destabilise the whole region if it evolves into the kind of disaster the Great Lakes region witnessed 21 years ago when an estimated 800,000 people were butchered in Rwanda.

On July 8th the US ambassador-at-large for war crimes issues, Stephen Rapp, said peaceful demonstrators in Burundi were repeatedly being shot at by supporters of the ruling party. “Burundi is a state party of the ICC, and this very much could be a situation in which individuals, even leaders, could be held to account for these crimes,” said Rapp.

Despite this threat to regional stability, the continent’s most powerful intergovernmental body appears unable or unwilling to act decisively against Burundi’s errant leader, president Pierre Nkurunziza.

Burundi’s crisis revolves around Nkurunziza’s decision to run for a third term in office in a presidential poll that was originally set for July 15th but was postponed until today in a bid to stabilise the situation.

His decision to seek a third term violates the constitution’s two-term limit as well as the 2005 Arusha accord that ended the country’s destructive and brutal civil war, opposition parties say.

Supporters of Nkurunziza maintain because he was not elected president in 2005 by popular vote but appointed by parliament, his first term in office does not count under the constitution’s two-term rule.

To date more than 70 men, women and children have been killed during ongoing protests and a failed coup attempt by disgruntled members of the military. Almost 144,000 refugees had fled into neighbouring nations by late June, according to the UN.

As the crisis intensified in May and June, local and international organisations called on the Burundian government to postpone the parliamentary and municipal election scheduled for June 29th until the situation improved.

This request was refused and the poll was marred by violence and electoral irregularities. UN election observers subsequently said the vote was not “free, credible and inclusive”.

East African community efforts to broker a peaceful path through the crisis have been under way since mid-May, with Ugandan president Yoweri Museveni appointed to mediate a dialogue between the ruling CNDD-FDD party and the opposition.

Yesterday it was confirmed three opposition candidates, including two former presidents, had withdrawn their participation in the poll as they felt it could not be free and fair. In addition, those involved in the May coup attempt maintained armed resistance to Nkurunziza’s bid for a third term would continue until he stood down.

Many stakeholders say what is playing out in Burundi is the result of a failure of leadership and a lack of fortitude displayed by the AU, the principal guarantor of the Arusha accord.

An editorial in South Africa’s respected Business Day newspaper in early July said when Nkurunziza made his bid for a third term he was playing a game he knew he would win.

“The AU has complained repeatedly about the unhealthy political state in which the recent elections were held. Mr Nkurunziza, a former army officer, went ahead anyway, knowing the AU could do no more to him than it has done to Egypt’s Abdel Fattah el-Sisi, which is nothing of substance,” it said.

The commentary went on to say the situation in Burundi shows “how powerless the AU is when it comes to making any meaningful intervention without the tacit consent of the problematic governments themselves. This is why the AU’s bitter complaints against the International Criminal Court ring hollow.”

That the ICC has laid charges only against African leaders is often cited by its critics as evidence western nations are primarily using it to further their own goals across the continent.

The rationale appears to be that there are many other leaders around the world in countries that are unable to prosecute them who should face human-rights charges, but the ICC appears unable to give the victims of these individuals their day in court.

If Africa’s test case for regional justice in Senegal fails to deliver, the ICC surely remains the best option for international justice on the continent.