Ethiopia loses 16.5 per cent of its GDP to the effects of malnutrition 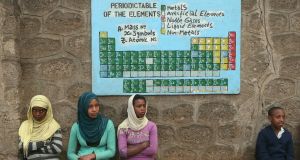 – Ethiopia, on the Horn of Africa peninsula, in eastern Africa, is landlocked by Eritrea, Djibouti, Somalia, Kenya, Sudan and South Sudan. Africa’s oldest independent country, it was a founding member of the UN. It was never colonised.

– Despite being one of the fastest-growing non-oil economies in Africa, Ethiopia is one of its poorest states, with among the lowest per-capita incomes.

– The government is pushing to diversify the economy to include more manufacturing, textiles and energy production; it currently revolves around agriculture. Coffee is Ethiopia’s main export.

– Ethiopians still heavily rely on food aid. More than 29 per cent of under-fives are underweight, and Ethiopia loses 16.5 per cent of its GDP to malnutrition’s effects.

– The country held its first multiparty elections in 1995; opposition parties boycotted the ballot, which was won by the ruling – and still in power –Ethiopian People’s Revolutionary Democratic Front.

– Eritrea gained independence from Ethiopia in 1993. Five years later the countries went to war over border demarcation. The fighting lasted until 2000 and is estimated by the UN to have cost both countries $1 million a day. A fragile truce holds between the two nations today.

– Education indicators remain poor. Just 37.5 per cent of children enrol in secondary education. Adult literacy is 39 per cent, according to Unesco’s 2008-2012 figures, and is higher among women.