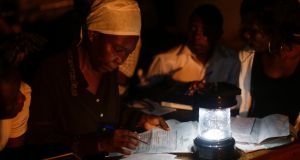 Electoral agents work with a lamp as the poll continues after 7pm at one of the polling stations where polls did not finish in time due to the late arrival of the voting materials in Kisugu village, Kampala, Uganda. Photograph: Dai Kurokawa/EPA

The man hoping to break Yoweri Museveni’s 30-year grip on Uganda’s presidency was briefly arrested on Thursday and the government shut down social media sites as voters cast their ballots under the gaze of police and soldiers in riot gear.

Opposition officials said Kizza Besigye was arrested at dusk and held for about 30 minutes in the capital Kampala.

All sides accuse each other of stoking tensions and assembling vigilante groups to intimidate rival candidates, and the leading opposition contenders predicted vote rigging.

Some voters in the capital area were frustrated by long delays at polling stations.

“Such a day is highly undermined by the lack of free and fair elections,” Mr Besigye (59) said.

Museveni (71) came to power in 1986 after a five-year guerrilla war and many Ugandans credit him with providing relative peace and stability. He is a staunch US ally.

“If anybody tries to bring violence, we shall just get him, put him in the deep freezer until he cools down and . . . the blood pressure comes down,” he said.

Museveni was widely expected to win, although in urban areas young voters blame him for not tackling endemic corruption or creating jobs.

1 Shane Ross: ‘I lost a friendship with Mattie McGrath completely. He got totally personal’
2 Murder in a crowded house: The full story of the Patricia O’Connor trial
3 Areas advised to ‘stop everything’ as Storm Jorge hits Ireland
4 Joshua Allen jailed for 15 months for drugs offences
5 Fianna Fáil and Fine Gael fear they are in a lose-lose scenario
Real news has value SUBSCRIBE