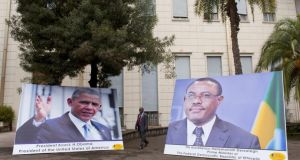 US president Barack Obama told Ethiopia’s leaders on Monday that allowing more political freedoms would strengthen the African nation, which had already lifted millions out of a poverty once rooted in recurring famine.

Mr Obama was speaking after talks with prime minister Hailemariam Desalegn on the first trip by a US president to Ethiopia, one of Africa’s fastest-growing economies, which is often criticised for its rights record.

He gave a similar message in Kenya last week at the start of his Africa tour, stressing the importance of human rights amid economic progress.

Ethiopia’s opposition failed to secure a single seat in a May parliamentary election, drawing scepticism from Washington, which has also criticised Ethiopia’s detention of bloggers and journalists. The government insists that those detained have committed crimes.

“The governing party has significant breadth and popularity and, as a consequence, making sure to open additional space for journalists or media or opposition voices will strengthen rather than inhibit the agenda that the prime minister and the ruling party have put forward,” Mr Obama told a news conference.

Mr Hailemariam, speaking at the same briefing, acknowledged his country was a “young democracy” that had more to do, but said he had “minor differences” with America about the speed of that process. He said Ethiopia needed journalists to be ethical and not have ties to violent groups.

“The Americans know [the situation] but they are cautiously looking away,” said Merara Gudina, vice-chairman of the Medrek opposition coalition. “They choose to wine and dine with dictators instead.”

Ethiopia, run by Mr Hailemariam’s ruling party for a quarter of a century, is on track for 10 per cent growth this year, helping transform a nation that was brought to its knees by communist purges in the 1970s and famine in the 1980s.

Mr Obama praised Ethiopia’s development record that had pulled “millions of people” out of poverty in the past 15 years in the nation of 96 million, although he said there were still too many people struggling.

“My message to the people of Ethiopia is: as you take steps moving your country forward, the United States will be standing by you the entire way,” he said.

Mr Obama discussed closer security co-operation with Ethiopia and praised its role in an African force in Somalia that was helping shrink the area controlled by al Shabaab militants.

Mr Obama’s Africa tour, which began on Friday in his father’s homeland Kenya, also aims to boost trade and business with a continent where China overtook the United States as the biggest trade partner in 2009.

The Ethiopian prime minister noted a century of diplomatic ties with the United States but said the US “investment flow doesn’t match”. He noted that America was a leader in science and technology, which could help Africa.

Ethiopia’s breakneck economic growth has been driven largely by state-led investment, which economists say is squeezing out private business. Mr Hailemariam said the country had to remove bureaucratic bottlenecks to avoid deterring investors.

The government has often turned to China to help build new roads, railways and dams in its bid to expand the industrial base in the largely agrarian economy. The new metro line that snakes through Addis Ababa was built by a Chinese firm. – (Reuters)