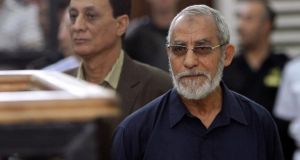 Mr Badie, convicted along with about 36 other Brotherhood leaders and supporters for the same crime, is facing the death sentence in two separate cases. All 37 defendants were also charged with blocking a major road north of Cairo during protests that followed Mr Morsi’s ouster on July 3rd, 2013.

The court also upheld death sentences for 10 other Brotherhood leaders and supporters, of whom 8 were charged in absentia, on the same crimes.

Among the Brotherhood leaders sentenced to death in absentia is Abdul Rahman al-Barr, a Muslim scholar and member of the Brotherhood’s Guidance Council.

Mohamed Abdel-Maqsoud, a Salafi preacher and a Brotherhood supporter, was also sentenced to death in absentia. He fled to Qatar after Mr Morsi was toppled.

Senior Brotherhood member Mohamed El-Beltagy and some former ministers from Mr Morsi’s administration were among those sentenced to life in prison.

The Egyptian authorities have launched a crackdown on Mr Morsi’s Brotherhood, jailing thousands and killing hundreds of street protesters. The state accuses the Brotherhood of turning to violence, an accusation the group denies.

Mr Badie and around 200 Brotherhood supporters were sentenced to death in a mass trial last month over violence that killed one police officer. The sentences caused outrage among western governments and rights groups.