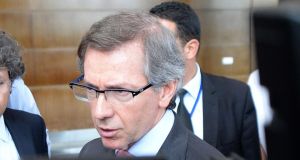 Libya’s elected parliament rejected a UN draft proposal to form a unity government and has withdrawn from talks aimed at ending the country’s crippling power struggle, a senior Libyan lawmaker has said.

The decision will be a blow to efforts by United Nations special envoy Bernardino Leon, who had presented a new proposal on Monday to form a unity government after hosting negotiations between Libya’s factions for months.

Libya currently has two governments and parliaments fighting for territory and oil resources. The official administration has been based in the east since a rival faction seized Tripoli in August, setting up another government.

The eastern parliament has also banned its delegates from travelling to Germany for a meeting with European and north African leaders to discuss Mr Leon’s proposal, lawmaker Tareq al-Jouroushi told reporters.

“A majority of deputies voted to reject the proposal,” he said by telephone from Tobruk, an eastern city where Libya’s official house of representatives is now based. The house’s spokesman Farraj Hashem could not be reached for comment.

Late on Monday, Mr Leon submitted his fourth proposal for a unity government. Delegates from both factions had been expected to head to Germany before returning to consult with their political bases and travelling back to Morocco for more talks.

The UN proposal calls for a one-year-long government of national accord, where a council of ministers headed by a prime minister with two deputies will have executive authority.

Mr Jouroushi said lawmakers objected to including the Tripoli parliament in the UN proposal.

“The proposal does not reflect the legitimacy of the elected parliament,” he said.

The deal had stated that the house of representatives would be the only legislative body. The accord also called for a 120-member state council consultative body, consisting of members of the Tripoli parliament.

Both sides of the conflict are under pressure from hardliners who favour a military solution.

Mr Jouroushi is the son of the eastern government’s air force commander, whose forces have been battling Islamists in the eastern city of Benghazi for a year.

Four years after a Nato-backed uprising that ousted Muammar Gaddafi, conflict has battered Libya’s oil industry and allowed Islamic State militants to gain a foothold in cities such as Derna and Sirte.