At least 63 people have been killed in attacks in Tunisia, France and Kuwait

Gunmen have killed at least 28 people in an attack on two beach hotels in the Tunisian coastal town of Sousse. 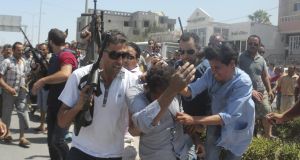 Police arrest a man suspected of being involved in an attack on a beachside hotel in Sousse, Tunisia. Reports suggest an Irish woman is among the 28 people shot dead. 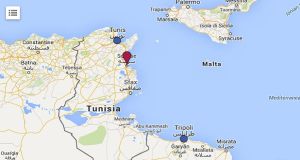 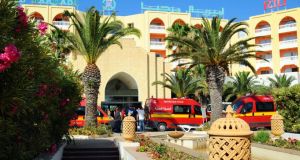 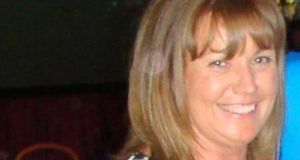 Lorna Carty from Meath who was killed in a terrorist attack at a resort in Sousse, Tunisia. 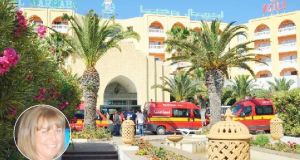 Lorna Carty from Meath who was killed in a terrorist attack at a resort in Sousse, Tunisia.

Over 60 people, including an Irish woman, have been murdered by Islamic extremists on three continents.

Lorna Carty was killed in the worst atrocity which occured in the Tunisian resort of Sousse, where gunmen opened fire on the beach in front of the Hotel Imperial Marhaba, killing at least 38 people, most of them foreign tourists.

Ms Carty was in her 50s and from the Robinstown area of Co Meath where she lived with her husband.

She worked as a nurse and was the mother of two children, a daughter who is believed to be on holiday after her Leaving Cert and a son who is a science graduate aged in his 20s.

Minister for Foreign Affairs Charlie Flanagan has said he could not rule out the possibility that other Irish holiday makers have been injured or killed in the shooting.

Islamic State (IS) claimed responsibility for an explosion in a Shia mosque in Kuwait City where at least 27 were killed.

In France, a French Muslim killed and beheaded his boss and attempted to blow up a gas factory near Lyon. The decapitated body was daubed with Arabic writing when found.

In the coastal town of Sousse in Tunisia, a gunman disguised as a tourist opened fire on the beach with a weapon he had hidden in an umbrella.

The gunman then entered the pool area of the Imperial Marhaba hotel before moving into the building, killing people as he went.

Mr Flanagan said the Department of Foreign Affairs was aware of a number of Irish families in the vacinity when the attack occured.

Speaking to reporters in Dublin, he said the Irish Ambassador to Madrid was travelling to Tunisia and the focus would now be on trying to establish the full facts and evacuating Irish citizens in the area.

Th Irish victim in Tunisia had been holidaying with her husband, who has made contact with the Irish consular authorities. Mr Carty does not appear to have been injured in the incident although both he and his wife were in the hotel when the attack occurred.

Speaking to reporters, the Tunisian health minister Said Aidi confirmed at least 38 people dead, including Britons, Germans and Belgium citizens, and 36 wounded, eight of whom are in critical condition.

Elizabeth O’Brien, an Irish woman on holiday with her two sons in the resort, described how she grabbed her children and ran for their lives when they heard gunfire erupting from one of the hotels.

“We were on the beach, my sons were in the sea and I just got out of the sea. It was about 12 o’clock and I just looked up about 500 metres from me and I saw a (hot air) balloon collapse down, then rapid firing, then I saw two of the people who were going to go up in the balloon start to run towards me — because I thought it was fireworks,” the Dubliner told RTÉ Radio.

“So, I thought ‘oh my God, it sounds like gunfire’, so I just ran to the sea to my children and grabbed our things and as I was running towards the hotel, the waiters and the security on the beach started saying ‘run, run run!’ and we just ran to our room, which is like a little bungalow.”

Ms O’Brien said the Irish consul in Madrid, Spain, called her to say it was a terrorist attack in the hotel next door and told her to stay where she was.

Another Irish tourist, who gave his name only as Anthony, said: “This was always a safe place but today was horror”.

“He started on the beach and went to the lobby, killing in cold blood.”

The Department of Foreign Affairs said anyone with concerns should call 01-4180200. It elevated its security status for Tunisia from “excercise caution” to “excercise extreme caution”.

Britons in the RUI Imperial Marhaba hotel are being flown back to Gatwick, Doncaster and Manchester airports.

Tension has been high in Tunisia since an attack on the National Bardo Museum in March killed 22 people, mostly foreign tourists. In Sousse, many tourists were already packing their suitcases into busses and checking out of hotels to leave after the attack this evening.

The Riu Imperial Marhaba has issued an update on their website: “First thing tomorrow we expect to have the exact death toll and the nationalities of the victims.

Sousse, alongside nearby Hammamet and the island of Djerba, is the heartland of Tunisia’s most popular beach resorts, drawing visitors from Europe and neighbouring North African countries like Algeria.

Around 1.2 million tourists visit Sousse every year, drawn by the hotels, sandy beaches and culture. Hotel complexes with 40,000 beds span from the old city to the Port El Kantaoui and the city is home to a Unesco-protected mosque, as well as a historic medina.