Concerns over faulty voting machines, poorly run polling stations and a halt in the vote 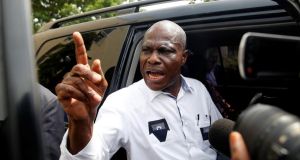 An influential African bloc urged the Democratic Republic of Congo on Sunday to recount the votes of its chaotic presidential election, raising pressure on Kinshasa to ensure the legitimacy of the next government and avert widespread violent unrest.

The December 30th vote was supposed to mark the country’s first uncontested democratic transfer of power in 59 years of restive independence, and the beginning of a new era after 18 years of chaotic rule by President Joseph Kabila.

But irregularities including faulty voting machines, poorly run polling stations and a halt in the vote for over a million people due to insecurity and an Ebola outbreak in the east, have overshadowed talk of democratic progress.

Yesterday’s intervention by the Southern African Development Community (SADC), which contains regional allies of Kinshasa such as South Africa and Angola, could push Mr Kabila to tackle the presidential runner-up’s accusations that the vote was rigged.

Second-place finisher Martin Fayulu said that he in fact won by a landslide and that the official winner, opposition leader Felix Tshisekedi, struck a deal with Kabila to be declared the victor. Mr Tshisekedi and Mr Kabila deny this.

Isolated post-election violence across the mineral-rich country of 80 million people that sprawls across central Africa has many fearing a return to the kind of civil war upheaval that has killed millions since the 1990s.

International pressure on Mr Kabila has been building since the vote, in part because the country’s influential Catholic Church said that tallies compiled by its 40,000-strong monitoring team show a different winner to those announced by the electoral commission, without saying who.

France, Belgium, the United States and Britain have all expressed concern about the vote.

But the SADC will hold greater sway in Congo. Its approval of the election’s results are critical for the legitimacy of president-elect Tshisekedi’s new government.

The SADC previously said the election went “relatively well” despite some problems. But yesterday it said it had taken note of the “strong doubts” cast on the poll by the church.

“A recount would provide the necessary reassurance to both winners and losers,” an SADC statement said. – Reuters