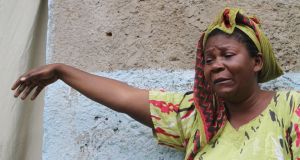 A woman is distraught after her son was killed during gunfire in the Nyakabiga neighbourhood of Burundi’s capital Bujumbura, December 12th, 2015. Photograph: Jean Pierre Aime Harerimana/Reuters

More than 150 armed men raided army facilities on Friday and 79 of them were killed, army spokesman Col Gaspard Baratuza said on Saturday.

Eight security agents, four from the army and four from police, died in the fighting and 21 security officers were wounded, he said. Col Baratuza said forces arrested 45 members of the unidentified group that attacked the military installations.

It is not clear whether the army’s number includes all of the 28 people whose bodies were found on Saturday morning on the streets of Burundi’s capital, Bujumbura.

Residents of the city said security forces searched houses and dragged out people and shot them, some with their hands tied behind their backs.

A climate of fear has engulfed Bujumbura after the sounds of battle could be heard throughout Friday and overnight. Residents hid in their houses leaving only security personnel patrolling the streets.

Some residents ventured out of their houses Saturday but largely remained uneasily in their neighbourhoods.

Fidele Muyobera (22), said: “I fear I can be killed like my friend yesterday, police came to search our house and by chance I escaped. If I had money, I would go buy a passport and flee.”

“What is the international community waiting for? Will they intervene when there are no more people in Burundi?” asked businessman Gerald Bigirimana in Nyakabiga while pointing at one of the bodies lying on the streets.

The body of a 14-year-old boy was found in the Jabe neighbourhood, a witness said. James Ntunzwenimana was shot dead while going to buy sugar, said the witness, who wanted to remain anonymous.

In the Nyakabiga neighbourhood, residents said they woke up to the shocking scene of dead bodies sprawled out on the streets. Witnesses said the security forces killed unarmed men.

An eyewitness said he counted 21 bodies with bullet wounds in their heads in Nyakabiga on Saturday morning. Some of the dead had their hands tied behind their backs, said the eyewitness.

In Nyakabiga soldiers pursued some of the men who attacked military installations in Ngagara and Musaga neighbourhoods, said Col Baratuza.

Col Baratuza said the attackers’ intention was to steal weapons to use to free prisoners. Hundreds of people opposed to the president’s third term have been imprisoned since April when it was announced Mr Nkurunziza would stand for a third term, sparking months of violent street protest and a failed coup.

The UN Security Council has strongly condemned the violence, and US ambassador to the UN Samantha Power said the council should look at “how the international community can protect civilians from mass violence, including for the possible deployment of a regionally led peace support operation”.

At least 240 people have been killed since April and about 215,000 others have fled to neighbouring countries, according to the UN.

Several hundred people have also been imprisoned for opposing Mr Nkurunziza’s re-election in July this year.