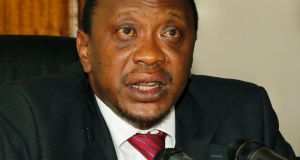 The African Union agreed to oppose the International Criminal Court’s efforts to put Kenya’s president, Uhuru Kenyatta (above), and his deputy, William Ruto, on trial later this year at The Hague on charges of crimes against humanity. Photograph: Reuters/Thomas Mukoya

The International Criminal Court has been accused by the African Union of conducting a race-based hunt against Africans at the close of the organisation’s three-day summit in Ethiopia.

The accusation was made on Monday evening as the AU agreed to oppose the ICC’s efforts to put Kenya’s president, Uhuru Kenyatta, and his deputy, William Ruto, on trial later this year at The Hague on charges of crimes against humanity.

The ICC charges allege that Mr Kenyatta, elected as president in March, and Mr Ruto helped to fuel the violence that followed the east African country’s elections in 2007 that left more than 1,000 people dead and hundreds of thousands displaced.

However, rather than see both men, who were on opposing sides in 2007, tried at the ICC headquarters in Europe, the AU endorsed a Kenyan proposal that their charges be handled by the court system in their home country.

At the end of the summit, AU chairman Hailemariam Desalegn, Ethiopia’s prime minister, charged that 99 per cent of those indicted by the ICC are from Africa, which left the body in no doubt the international court’s prosecutors were intentionally targeting Africans.

“The African leaders have to come to a consensus that the process the ICC is conducting in Africa has a flaw,” he said.

“The intention was to avoid any kind of impunity, but now the process has degenerated into some kind of race hunting. We object to that.”

The ICC, established in 2002 to try some of the worst crimes, many of which are committed in countries with underdeveloped legal systems, has insisted it acts impartially in all its cases.

However, the organisation, ratified by 121 countries, has increasingly been accused of being biased against African nations because of the high numbers of Africans it is pursuing.

The ICC has only ever issued arrest warrants for Africans. It currently has investigations under way in eight countries: Uganda, Democratic Republic of Congo (DRC), Central African Republic, Sudan, Kenya, Libya, Cote d’Ivoire and Mali.

Despite the AU decision on Monday, the ICC yesterday confirmed it intended to press ahead with the case against Mr Kenyatta and Mr Ruto.