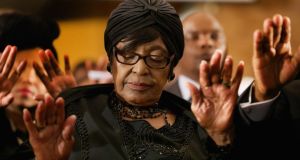 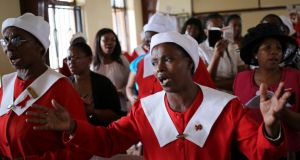 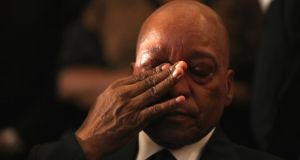 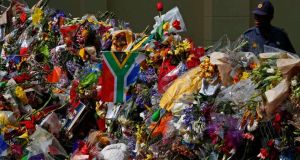 Fifty-nine foreign heads of state or government have said so far they will attend either the memorial ceremony or the state funeral of Nelson Mandela in South Africa in the coming week, a foreign ministry spokesman has said.

He said the final number of who would attend either Tuesday’s memorial in Johannesburg or the funeral in Qunu next Sunday would be confirmed in due course.

Earlier today South African president Jacob Zuma said Mandela “ stood for freedom, he fought against those who oppressed others he wanted everyone to be free,” y as he marked a day of prayer and reflection to commemorate the life of late former president .

South Africans have flocked to houses of worship for a national day of prayer and reflection to honour the former president.

“He stood for freedom, he fought against those who oppressed others he wanted everyone to be free,” Mr Zuma told those gathered. He urged people “not to forget some of values he stood for fought for sacrificed his life for”.

“When our struggle came to an end he preached and practiced reconciliation to make those who have been fighting to forgive one another and become one nation,” he said.

At the Regina Mundi Church in Soweto, Father Sebastian J. Rossouw described Mr Mandela as “moonlight,” saying he offered a guiding light for South Africa. Hundreds of people attended mass in the small church. “Madiba did not doubt the light,” Mr Rossouw said. “He paved the way for a better future, but he cannot do it alone.”

Mr Zuma yesterday reiterated a call to all to go to stadiums, halls, churches, temples or synagogues today, to celebrate Mandela’s life, and through his memory, the lives of all other South Africans who opposed colonialism and apartheid, black and white.

“We should, while mourning, also sing at the top of our voices, dance and do whatever we want to do, to celebrate the life of this outstanding revolutionary who kept the spirit of freedom alive and led us to a new society,” he said.

Mandela’s body is being prepared to lie in state at the Union Buildings in Pretoria next week, where untold thousands of people are expected to come and bid the anti-apartheid icon a final farewell.

Minister in the Presidency Collins Chabane said yesterday that access to the official state events surrounding Mr Mandela’s send-off would be controlled by security forces, but that it is hoped as many people as possible will be accommodated.

“As we speak today, president Mandela’s body is being prepared by the military health service of the SA National Defence Force to lie in state... from Wednesday, December 11th , to Friday, December 13th,” he told reporters in Johannesburg at the first official media briefing related to the event.

“While this is happening, work is under way at critical venues such as the Union Buildings, FNB Stadium in Johannesburg, Mthatha and Qunu in the Eastern Cape, and at ports of entry, to prepare for the events related to the state funeral,” he added.

Mr Chabane said the South African government was in consultation with the provinces to ensure people from around the country could attend the official memorial service at the FNB Stadium, in Johannesburg, on Tuesday.

However, he conceded that not everyone could be accommodated at the 80,000-seater stadium. “Unfortunately, we can never get an unlimited space,” he said, before urging the public to watch the memorial from “alternative viewing areas”.

The following are the main events in the South African government’s official programme for the mourning and state funeral of Nelson Mandela, who died on Thursday, aged 95:

Sunday, December 8th - National day of prayer and reflection in which South Africans will celebrate the life of Mandela and his legacy in places of worship, homes and communities.

Tuesday, December 10th - Official memorial service for Mandela to be held at the FNB Stadium in Johannesburg, also known as the Soccer City stadium, the site of the 2010 World Cup final. This will be attended by members of the public and by a number of visiting heads of state and government.

Wednesday, December 11th to Friday, December 13th - Mandela’s body will lie in state in an open casket for three days at the Union Buildings in Pretoria, the seat of the South African government, where it will be viewed by citizens and selected international visitors and guests.

The casket will be transported daily between 1 Military Hospital, Thaba Tshwane, and the Union Buildings. The government is inviting mourners to line this route and form a public guard of honour.

Saturday, December 14th - Mandela’s body will be transported to the Eastern Cape from Air Force Base Waterkloof in Pretoria, where the ruling African National Congress (ANC) party will bid it farewell.

Also on this day, a procession will take place from Mthatha to Qunu, Mandela’s ancestral home, where the Thembu community to which he belonged will conduct a traditional ceremony.

Sunday, December 15th - A state funeral will take place at Mandela’s home and final resting place at the family homestead in the village of Qunu in the Eastern Cape. This will be open to selected dignitaries and heads of state who request to attend.