The rocky roads to Lissadell 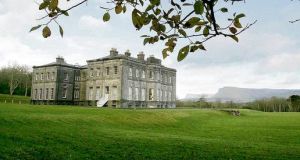 Lissadell House, which was undergoing extensive renovation, before the dispute. Photograph: Alan Betson

The dispute between Sligo County Council and the owners of Lissadell House, who refute the council’s case for public rights of way, returns to the High Court on Tuesday, with costs estimated at €4 million

ON TUESDAY, the High Court case concerning a dispute between Sligo County Council and the owners of Lissadell, Edward Walsh and Constance Cassidy, over public rights of way through the Lissadell estate will recommence. The case was adjourned on October 21st, when lawyers for Sligo County Council said they had found historic documents that may be relevant to the case, and needed time to examine them. The council is also facing a claim for damages for alleged slander of title, negligence, and intentional and/or unlawful interference with the owners’ economic interests. By the time the case concludes, Sligo’s most iconic house could be permanently closed to the public.

Lissadell was once the home of the Gore-Booth family. WB Yeats immortalised both it and the Gore-Booth sisters in his poem, In memory of Eva Gore Booth and Constance Markievicz, the well-known opening lines of which read: “The light of evening, Lissadell/ Great windows open to the south/ Two girls in silk kimonos, both/ Beautiful, one a gazelle.”

In 2003, Lissadell, by then representing something not far off an extravagant ruin, albeit one that still had a roof, was sold by the Gore-Booth family to barristers Edward Walsh and his wife, Constance Cassidy. The State had been given first option on the house, but did not make a bid. The new owners spent €3.75 million on the house and, shortly afterwards, an additional €800,000 on contents at the house auction initiated by Sir Josslyn Gore-Booth.

At the time the news broke that the Walsh-Cassidys were the successful buyers, Walsh was quoted in this newspaper as saying “the public will have significant access, but in a manner which they will hopefully respect”. The couple, who have seven children and whose primary residence is the period house of Morristown Lattin in Co Kildare, announced that Lissadell would be their second home; that over time they intended to restore both it and the gardens and to preserve and promote Lissadell’s literary and cultural associations.

At their own expense, the Walsh-Cassidys started to restore the house, and to develop previously ruined buildings such as the riding school, stables, courtyard and coach houses. These were converted into galleries and exhibition spaces, a shop which sold organic produce and preserves from the estate, and a café.

Formerly pot-holed roads through the estate were tarmacadamed, and local use of these roads increased. One of these offers a short-cut to Lissadell beach, which is also accessible by a public road. The walled garden was restored and an Alpine garden was partly restored. An exhibition about Countess Constance Markievicz opened. By 2008, visitor numbers had risen to 44,000 and the estate employed 34 people. To date, a total of €12 million has been invested in the estate.

During this time, occasional silent statements were made at nightfall, with gates and barriers being removed and dumped, and messages proclaiming public rights of way written by anonymous members of the public. They had virtually died down by the winter of 2008, when Sligo county councillor Joe Leonard unexpectedly tabled a motion about public rights of way at Lissadell. On December 1st, 2008, councillors voted to amend Sligo’s county development plan to include a provision for “the preservation of public rights of way” along all the roads that run through Lissadell. There are four routes into Lissadell, and one road circles the house itself.

The Walsh-Cassidys responded by stating that Lissadell had been bought as a private property and the issue of public rights of way had never been raised during the sale: that they did not exist. In what developed into a volatile meeting between the owners, Sligo county manager Hubert Kearns and senior council officials in January 2009, Walsh described their actions as “a kick in the teeth in the true spirit of Irish begrudgery from many, many people”. The house and gardens, previously open all year round, have been closed for most of the time since the dispute with the council started, although they did open for part of last summer.

AT PRESENT, LISSADELL remains closed to the public, but The Irish Times was offered private access this week. Everything is clearly on hold at the estate, although the organic garden continues to be tended, and the produce sold off-site. A major new Yeats exhibition, put together by Lissadell’s owners, and valued at €250,000, was due to be displayed last year in the newly developed Yeats gallery upstairs in the coach house complex. The exhibition was to be a focal point of the Yeats Trail, a tourism venture promoted by Fáilte Ireland, the Yeats Society and Sligo County Council, which launched this time last year. It is now in storage and, to date, has never been publicly displayed. In its place is a simple filler exhibition of a Victorian collection of shells and flower prints.

The Walsh-Cassidys, who have indicated in the past that they will not reopen the house or estate if they lose the case, would not make any comment. A statement on their website, lissadellhouse.com, relating to the closure of the estate, includes these words: “This action by Sligo county council makes it impossible to operate Lissadell either as a historic house or indeed a private home for reasons of public health and safety, insurance and not least, the simple matter of security both for our family and the thousands of visitors to Lissadell.” It concludes: “If we do not enjoy the support of the councillors who represent the people of Sligo then our efforts are at naught. Why would anyone continue?”

In Sligo this week, it was difficult to find anyone prepared to speak on or off the record in support of the county council’s action. Joe Leonard, the councillor who originally raised the issue, declined to speak to The Irish Times. The Sligo county manager, Hubert Kearns, was not available to comment on the case.

Fáilte Ireland in Sligo, which has consistently and prominently promoted Lissadell as a tourist destination, stated only that, “We have to remain impartial, due to the sensitivity of this contentious issue.”

The Lissadell Action Group, which asserts that public rights of way exist – although one member pointed out they had met formally only once or twice – would not speak to The Irish Timeswhen approached. One member, who did not want his name to be printed, and who claims the group is unfairly misrepresented by the media, did admit that “it’s an awful shame it had to end up like this, in the High Court”.

One person prepared to speak on the record was Sligo’s mayor, Cllr Jim McGarry. “I said from day one that it’s a lose-lose situation,” he declares angrily. “For several years, people have been campaigning for a flagship tourism project for Sligo, and Lissadell has developed into that project. There were 44,000 visitors in 2008, and the project is still in its infancy. If it remains closed, it will have a devastating impact on tourism. I asked on several occasions that the county manager would halt proceedings and enter into negotiations with the family, to no avail. I think the public at large in Sligo are very much against Sligo County Council taking this case.”

McGarry points out that the council had to cut its budget by €2 million in 2009, and that 44 jobs were cut. “Having to pay costs of €4 million could mean the loss of 88 jobs,” he suggests.

The Yeats Society, which is open year-round, and runs the annual Yeats summer and winter schools, celebrated its 50th anniversary last year. A visit to Lissadell for students has always been part of the programme it offers. It was involved in developing the Yeats Trail initiative, which was to showcase the new, but unopened Yeats exhibition at Lissadell. Stella Mew is the current CEO of the society.

“From our point of view, closing Lissadell would be a huge loss not just to the people of Sligo, but people all over the world interested in Yeats,” she states. “There’s a lot of tourist sites the people of Sligo would go to once, but Lissadell, the grounds and the café are places that local people went to often. I have no problem saying I favour the Walsh-Cassidys winning the case.”

Maura McTighe is a former president of the Yeats Society. “Since Lissadell was bought, it has become a place we could bring – with pride – visitors from all over the world. The owners were restoring Lissadell to its former glory,” she says.

“If Lissadell closes, we’re losing out on a great economic advantage to Sligo. Yes, Yeats is buried in Drumcliff, but Yeats’s grave doesn’t give employment. That it has got to this point is scandalous, and I don’t know who to blame. I’m sad, and I’m probably angry that the bigger needs of Sligo and the county weren’t examined before Sligo County Council decided to go ahead with its motion.”