In Jobstown, where the Tánaiste faced the wrath of anti-water charges protestors , the Yes margin was reportedly 87% 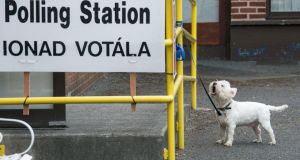 A dog waiting outside a polling station on Friday while his owner casts his vote. Photograph: Dave Meehan

The strong Yes vote returned by many working class areas, particularly in Dublin and Limerick, showed such communities were embracing social change faster than those in middle class areas, according to Yes campaigners.

In socially disadvantaged areas of Dublin Darndale, tallies indicated an 80 per cent Yes. In Coolock it was 88 per cent.

On the southside, tallies suggested the Liberties voted 88 per cent Yes, Cherry Orchard 90 per cent and Ballyfermot 85 per cent.

In Jobstown, where the Tánaiste, Joan Burton faced the wrath of anti-water charges protestors in November, the Yes margin was reportedly 87 per cent.

In Limerick similarly, the Yes vote was 72 per cent in South Hill and in Ballynanty and 68 per cent in Moyross, according to tallies.

Gráinne Healy of Marriage Equality, said she was not surprised at the strong ’Yes’ votes from “working class and deprived communities” after months of canvassing in communities across the social spectrum.

The question now, she said, was whether that political engagement could be mobilised to have a significant impact in the forthcoming general election.

“When we were out canvassing in areas like Finglas, there was an overwhelming Yes on the doorsteps. Once we moved into Glasnevin, there would be more resistance. It seemed the houses with two cars and plenty of money were just less open to Yes,” said Healy.

“That was confirmed when the ballot boxes were opened on Saturday.”

Minister for Equality, Aodhán Ó Ríordáin, said the No campaign’s focus on the traditional family “annoyed” many in working class communities which have “thrived in different family forms without the judgementalism of their neighbours for years.”

Ruth Coppinger, TD, of the Anti-Austerity Alliance, said the results showed the “myth” that social change would be “led by the middle class” was “untrue”.

She said there was a “more complete” break away from Church-teaching in working class areas .

“Working class communities know their voice is important, their vote is important and they have a hunger for radical social change.”