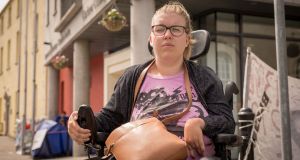 Niamh O’Neill outside the offices of Carlow County Council. “I’m emotionally stressed over this – it’s gone beyond a joke.” Photograph: Dylan Vaughan

A woman living with cerebral palsy who is currently being housed in emergency accommodation in a hotel in Co Carlow has appealed to the local authority to find her suitable long-term wheelchair-accessible accommodation.

Niamh O’Neill, who was born with the condition, says she has nowhere else to go having moved out of the family home due to an altercation some months ago.

The young woman, who is a wheelchair user, told The Irish Times that she is very distressed with not having a proper home to live in and was forced to present herself to the Carlow County Council homeless services.

“I’m currently homeless; I became homeless on the 20th of January after an issue with my family. I had a good friend in Kilkenny who took me in for a while because she is in a wheelchair herself and her house was wheelchair-accessible.

“She took me in for three and a half months but I was sleeping on her couch. I presented myself to the Carlow Homeless Executive on the 16th May. The council have placed me in emergency accommodation in the Dolmen Hotel.

“I can’t live like this, though, because of my condition, it’s too difficult not having my own place and there’s a great sense of uncertainty living in a hotel room. You don’t know from one week to the next what’s going to happen. The hotel is getting busier now that it’s summer and I’m worried that I am going to be left on the street.”

The 26-year-old, who is currently living on a disability allowance of €193, says that she feels let down by the system.

“Where am I meant to go? The council have been patronising me into going home or to live with a family member, but this is not an option for me. The only house that is wheelchair-accessible in my family is the one that I can’t return to.

“I’m trying to sort myself out with food and getting by on my disability allowance. I have sat down with my disability officer and my social worker to try and weigh up my options but for now I’m at the mercy of emergency accommodation.”

Ms O’Neill explained that because of her cerebral palsy, she is entitled to four weeks’ respite care during the year and she has already used up her four free weeks.

“I was told by Carlow County Council that they will keep providing me with emergency accommodation but they do not have any wheelchair-accessible accommodation at present.

“Going home just is not an option for me and I’ll be out living on the streets sooner than returning there.”

A spokesman for Carlow County Council told The Irish Times that Ms O’Neill has been included on their housing list and she would be able to avail of rent support.

“We have regarded Ms O’Neill as an emergency and have provided her with hotel accommodation. We don’t intend to stop this; a person in a wheelchair would be an emergency at anytime. At the same time we would anxiously pursuing the possibility of the extended family or the immediate family as perhaps the care that would be available there would be superior to that of anywhere else.”

“Our social people are working actively in the area to see can an agreement be reached. I suppose at the end of the day we will have to provide accommodation until such time as the wheelchair property might be available.”

Ms O’Neill says the uncertainty of not knowing where she is going to be housed has been extremely stressful for her.

“I have to say the Dolmen Hotel have been so helpful to me when I’m coming and going from the hotel. Each one of us has a human right to be housed.

“I’m emotionally stressed over this, it’s gone beyond a joke and I’m appealing to Carlow County Council to please find me a longer-term home.”