Committee Against Torture to examine Ireland’s compliance with convention 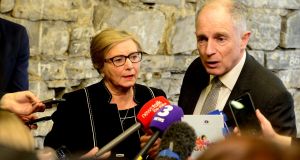 Minister of State for Equality David Stanton: A Government delegation, led by Mr Stanton, will face questioning on issues including access to a lawyer for people in Garda custody and the impact of Ireland’s abortion regime on women and girls. Photograph: Cyril Byrne

The treatment of people in Garda custody, including foreign nationals refused entry to Ireland, was among the issues raised at the UN Committee Against Torture in Geneva on Wednesday.

Ireland will be examined by the committee on compliance with the Convention Against Torture (CAT) on Thursday and Friday, with oral statements given by NGOs on Wednesday.

A Government delegation, led by Minister of State for Equality David Stanton, will face questioning on issues including access to a lawyer for people in Garda custody, the impact of Ireland’s abortion regime on women and girls, the treatment of survivors of historical institutional abuse, the system for investigation complaints of Garda ill-treatment, mental health services, and inspections of places of detention.

Several non-government organisations are in Geneva for the session, including the Irish Family Planning Association (IFPA), the National Women’s Council of Ireland (NWCI), the Irish Penal Reform Trust (IPRT), the Irish Council for Civil Liberties (ICCL) and Justice for Magdalenes Research. The Irish Human Rights and Equality Commission is also there.

Liam Herrick, executive director of the ICCL, told UNCAT that Ireland had a “troubling history of failing to protect those we have placed in closed spaces. In that context it is essential that we now move to put in place a strong [system] which can ensure no place of detention – prison, police cell, hospital or care home – is beyond the reach of comprehensive and rigorous inspection.”

He said “the most serious human rights violations” could take place in these environments.

The IPRT said it was “wholly unacceptable” that anyone being detained on an immigration issue should ever be held in prison.

“Such practice has been condemned in the past by the European Committee on the Prevention of Torture (CPT), which stated that on a number of occasions the Committee’s delegations have found immigration detainees held in prisons,” said the trust.

In a joint statement, several NGOs referred to Ireland’s abortion regime as “cruel” and “degrading” to women and girls.

“The prohibition of abortion forces women and girls, regardless of their age, means, health status, family of personal circumstances, to endure the financial, physical and emotional burden of leaving Ireland to access abortion services in another state,” said the group including the IFPA, Amnesty International Ireland, the NWCI and the Abortion Rights Campaign.

“Denial of abortion disproportionately harms women and girls whose health is compromised, or who experience disadvantage and discrimination, in particular minors, asylum seekers and others who cannot travel to another state. It delays their access to services. Some women are forced to continue pregnancies against their wishes.”

Also represented in Geneva are groups advocating for survivors of mother and baby homes, as well as survivors of institutional abuse who have had negative experiences interacting with the Caranua agency, which was established by Government to disperse €110 million provided by religious to improve the lives of survivors.

The is Ireland’s second examination on compliance with UNCAT, the last being in March 2011.

The Government delegations will hear calls from the committee that Ireland ratify the Optional Protocol to the CAT, having signed it in 2007. That ratification would provide for a national and international inspection mechanism of all places of detention, including hospitals, nursing homes, care homes, prisons and police cells.