Republic’s activists will back LGBTI rights and abortion reform in the North, event told 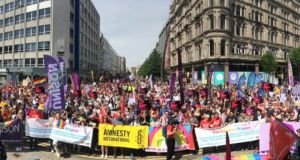 Protesters call for marriage equality in Northern Ireland, at a rally in Belfast. Photograph: Amanda Ferguson

Co-director of the Together for Yes campaign Ailbhe Smyth has said activists from the Republic will support the people of Northern Ireland in their quest for marriage equality and abortion law reform.

Ms Smyth was among the speakers at the Love Equality March for Marriage Equality parade and rally attended by thousands of people in Belfast city centre on Saturday.

The leading figure in the recent successful campaign to repeal the Eighth Amendment of the Irish Constitution, which prohibited abortion, said activists in the South were committed to helping the North achieve marriage equality and abortion rights.

“We are with them every step of the way here,” she said.

“Our issues are connected, our island is connected and we absolutely stand with everybody here today for marriage equality and also for abortion law reform.”

Before Stormont collapsed in January 2017, five motions had been brought forward to the Assembly on same-sex marriage. However, an Assembly vote in favour of extending civil marriage rights to same-sex couples was vetoed by the DUP using the petition-of-concern blocking mechanism.

Recent surveys have shown a majority of people in the North support the introduction of same-sex marriage and reforming abortion law.

British Labour MP Conor McGinn, originally from south Co Armagh, introduced a 10-minute rule Bill on same-sex marriage legislation for the North in Westminster earlier this year, but the Bill was subsequently blocked.

“The legislation is still on statute so it can be brought back again,” he said.

“The [British] government need to get off the fence and support it.

“We need more than nice tweets telling people to have a great day at this rally.

“They need to change the law, they just need to do it.”

Mr McGinn said that, while the DUP confidence-and-supply arrangement with the Tory government was a factor, the British reluctance to legislate for same-sex marriage in the North was not just due to that issue.

“There is a reluctance to legislate for it because they consider it devolved, but in truth the Assembly has voted for it, the people are overwhelmingly in support of it, and in the absence of Stormont people can’t be denied their rights so the UK government has a duty to act,” he said.

The Fall actor and LGBTI rights activist Bronagh Waugh told the event that the citizens of Northern Ireland were “sick of being treated like second-class citizens”.

“We are the only place that still does not have marriage equality and it is unacceptable,” she said.

“Stormont is stood down. It is time for Westminster to legislate, they have the power to do it.

“We are here to demand Theresa May legislates.”

Among a Fianna Fáil delegation in Belfast was Tiernan Brady, director of the Australians For Equality campaign, who said it was “time to pass a law which the majority of people want”.

“We can feel the unfairness,” he said.

“You can be born anywhere on these islands and be entitled to the same status and dignity as everyone else in your family, apart from here.”

Ms Maloney said she stood in Belfast as a “proud, confident trans woman”.

“Life is too short to live in the shadows,” she said.

“We are human beings. All we ask is to be respected.”