Teens in Ireland more likely cyberbullied than other countries 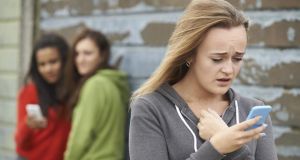 Irish teenagers appear more likely to be the victims of cyberbullying that teens in other countries a new survey has revealed. Photograph: Thinkstock

Irish teenagers appear more likely to be the victims of cyberbullying than teens in other countries a new survey has revealed.

A survey conducted by YouGov on behalf of Vodafone found that one in four teens in Ireland had been cyberbullied compared with one in five across 11 other countries surveyed while most Irish teens lack the coping skills to deal with the abuse.

Almost two thirds of Irish teenagers described cyberbullying as being worse than face-to-face bullying while just over half said it was a bigger problem than drug abuse for young people.

The global survey of almost 5,000 teenagers across 11 countries including Ireland has revealed found that 45 per cent of Irish teenagers felt helpless when they were the victims of cyber-bullying while 29 per cent admitted that they felt “completely alone” when they were targeted. One in four of those who had been cyberbullied went so far as to experience suicidal thoughts as a result.

Nine in ten Irish teens said they would find it easier to cope with cyberbullying if they received support from their friends on social media however four in ten admitted that they would find it hard to find the right words to support a friend who was being bullied online.

Almost three quarters of Irish teens surveyed said they would be likely to use an emoji to express compassion or support for friends being cyberbullied.

At a breakfast briefing in Dublin on Tuesday morning attended by Minister for Education Jan O’Sullivan and representatives of children and youth organisations, Vodafone Ireland launched the #BeStrong anti-cyberbullying initiative, which aims to build emotional resilience amongst teens online.

“No one who is experiencing bullying of any form should suffer in silence and this is particularly true in terms of cyber bullying,” Ms O’Sullivan said. She acknowledged “the tremendous work” being done by a range of voluntary organisations in tackling cyberbullying and said the #Bestrong initiative would “prove beneficial to everyone working in this important area”.

Launching the initiative Vodafone CEO, Anne O’Leary children wanted to “reach out and help or support each other, this was very evident from the research, but there is an issue around how they can do that. Recent academic research has found that it is difficult for young people to show compassion and support for their friends in words if they are being bullied online.

“That shouldn’t come as much of a surprise to us. We have all been tongue-tied teenagers at some stage and have difficulty expressing what we feel. I hope that our research and the new emojis will be of some help in the battle against cyberbullying. We have a long way to go in terms of dealing with the overall problem but every small step helps.”

“As a society we need to work together to tackle cyberbullying and equip young people with the confidence and skills needed to safely navigate this new world they inhabit,” said the head of the ISPCC Grainia Long. “This campaign demonstrates how this can be achieved and utilises mediums that young people can connect with.