Comedian regards Jesus as a ‘very good soul’ but ‘a lot of things he says are nonsense...twee’ 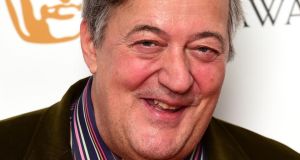 Stephen Fry: ‘Why should I respect a capricious, mean-minded, stupid God who creates a world which is so full of injustice and pain?’ Photograph: Ian West/PA Wire

The English comedian, actor, writer and presenter Stephen Fry has described God as “quite clearly a maniac”, “monstrous, utterly monstrous”, and “totally selfish”.

During a TV interview with Gay Byrne on RTÉ One’s The Meaning of Life, Fry was asked what he would say to God on arrival at the pearly gates. He replied: “I’ll say, ‘Bone cancer in children? What’s that about?’ How dare you? How dare you create a world in which there is such misery that is not our fault? It’s not right. It’s utterly, utterly evil.

“Why should I respect a capricious, mean-minded, stupid God who creates a world which is so full of injustice and pain? That’s what I’d say.”

He continued: “Now if I died and it was Pluto, Hades, and if it was the 12 Greek gods then I would have more truck with it because the Greeks were . . . they didn’t pretend not to be human in their appetites and in their capriciousness and in their unreasonableness.

“We have to spend our life on our knees thanking him? What kind of God would do that?

“Yes the world is very splendid but it has in it insects whose whole life cycle is to burrow into the eyes of children and make them blind. It eats outwards from the eyes. Why?

“Why did you do that to us? You could easily have made a creation in which that didn’t exist. It is simply not acceptable.”

Atheism, he said “is not simply about not believing there is a god but, on the assumption that there is one, what kind of god is he?

“It’s perfectly apparent that he is monstrous, utterly monstrous, and deserves no respect whatsoever.

He regarded Jesus as “a very good soul” but that “a lot of things he says are nonsense . . . twee . . . a bit like the Dalai Lama”. He described Pope Francis as “a totally admirable figure.”

Where love was concerned, he said, “To feel yourself being loved is a terrible honour, an awful privilege, as Kenneth Tynan once said.

“It’s both a privilege and awful, yet when it goes right it’s magnificent.”

He had found it difficult “both giving it and receiving it”, he said, which he attributed to “ the perfection of my parents’ marriage which seemed unmatchable .”

He was, however, now “very happy. I have a happy partner, very much in love and pretty cheerful, which is good.”

The interview took place before his recent marriage to Elliott Spencer.