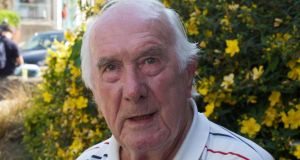 Rev Dr William O’Neill, who had been author of Presbyterian Notes for The Irish Times since 1960. Photograph: Sara Freund/The Irish Times

His name is Bill O’Neill and at the end of last month he finished writing for The Irish Times after 55 years. Is this a record?

He had been author of the paper’s Presbyterian Notes since 1960, when Éamon de Valera was president, Seán Lemass was taoiseach, Harold Macmillan was Britain’s prime minister, John F Kennedy was president of the US, John XXIII was pope and Bono wasn’t even born.

Rev Dr William O’Neill, known to all and sundry as “Bill”, is told by neighbours in Howth he looks 65.

“A wonderfully, wonderfully healthy woman all her life, she had a fall,” he recalls.

Bill O’Neill was born in Woodvale Park at the top of the Shankill Road in Belfast, the eldest of nine children.

He felt his mother wanted a daughter. It took her six boys before she had one.

He worked at James Mackie and Sons and at Short Brothers and Harland. During the second World War he made shells and aircraft parts.

Then he decided on the ministry. He attended Magee College, Trinity College Dublin, Union Theological College, and Queen’s University Belfast, from where he graduated in 1954.

He was then briefly assistant to Rev Billy Thompson – who brought the Samaritans to Ireland – in east Belfast.

From there Rev Bill went to Union Theological Seminary in New York, where he took a master’s in sacred theology.

He was a chaplain with the Royal Air Force for four years, involving service in Wales, England, Cyprus and Iraq, and then studied for a doctorate in philosophy at Trinity.

It was around then he first met Madge. Both had learned the piano from the same teacher in Finaghy.

He had called around to the teacher to say hello and she was there. She gave him a lift home in her father’s car.

Some time afterwards she went on a camping trip to Scotland and sent him a postcard. On it she wrote, “I love you.”

Around the same time he talked to Rev Eric Gardner in Lucan, “who was desperately looking for someone to take services at the church on Athy Road, Carlow”. Bill did so.

Madge asked afterwards: “Could you go there?” He did, for three years.

The couple married in 1960 and had three children.

That same year Rev Murray Moore, then in Clontarf, approached him about writing the Presbyterian Notes for The Irish Times.

“I liked the crowd [at the newspaper] and was very happy to keep scribbling,” he said.

In 1963 he became a minister in Howth-Malahide and has been living in Howth since.

He was minister there until 2004 and has been in the ministry over 60 years.

He was also a founder member of Irish Council for Radio and Television Affairs and Presbyterian administrator for radio and television services in the Republic from 1960 to 2000.

Nowadays his children “are all around”, but he is not enamoured of old age. Asked about plans he replies, directly: “Dying.”

He says that old age is a “problem” for him.

“The inevitability of moving on and the idea of being tied to a wheelchair doesn’t appeal.”

Meanwhile he is “quite active” and takes daily walks on the pier.