No change in priests’ role in civil aspect of marriage - primate 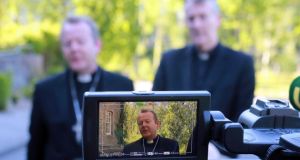 Image from a media briefing at the conclusion of the Summer General Meeting of the Irish Bishops’ Conference in Maynooth on June 10th, 2015. Pictured is Archbishop of Armagh and president of the conference Eamon Martin. Photograph: Nick Bradshaw

The Catholic primate has indicated there is to be no change in the role of priests in the civil element of marriages despite the passage of the same-sex marriage referendum.

Archbishop Eamon Martin was speaking at the end of the Catholic bishops’ summer meeting in Maynooth on Wednesday, the first time they have met collectively since the referendum.

“As far as I can see, the church would indeed like to continue solemnising marriages,” he said.

“We recognise that a lot of couples who come to our churches for marriage want to have that recognised also as a civil marriage, and we’re very appreciative of that.

“We understand that the Minister said today the legislation is being drafted. Of course we’ll take a look at that and we’ll monitor the situation to see if it’s possible for us to continue, and I’m hopeful that it will be possible,” he said.

On April 12th, referring to the priest’s church and civil roles at marriages, bishops’ spokesman Martin Long said: “If the referendum is passed, the church’s view and the State’s view of marriage will be radically different. It’s reasonable that the bishops may decide to separate the two.”

Asked about this on May 4th, Dr Eamon Martin said: “We haven’t made up our mind… clearly it is an issue for us.”

On Wednesday evening, he disputed whether the bishops ever used the word “threat” in discussion of withdrawal of priests from civil aspects of marriage ceremonies.

“The word threat came from yourselves in the media,” he said. “We will take a look at this new changed scenario …but as far as I can see, the church would indeed like to continue solemnising marriages.

“The question is, does the State wish us to do so and will it be constitutional for us to do so. Those are questions which haven’t been answered yet.”

The referendum result was, he said, “a wake-up call” for the church.

“I do believe this a new pastoral reality for us. But we’re up for it,” Dr Martin said.

“We have to look at a range of issues. For example, what way are we teaching people about marriage? What’s happening in our schools? Are we effectively teaching people? Is it good to rely totally on our schools in order to have a catechetical programme?

“We’ve been looking at the whole link between parish, home and school in terms of our teaching, in terms of getting our message out,” he said.

He agreed there was a gap in the relationship between the church and Ireland’s gay community.

“It is gap, I think, in Ireland in particular. It’s going to be a difficult issue for us because quite clearly our church’s teaching is not something that gay people welcome - but I do believe there is a room for understanding of each other.”

He welcomed the Vatican announcement of a new tribunal to hold bishops to account for mishandling cases of clerical child sex abuse. “I would welcome any decision by the Holy Father to hold all of us accountable.”

He said he felt what Pope Francis was saying, when it came to child safeguarding, was that “everyone in society is accountable and their office should not protect them”.